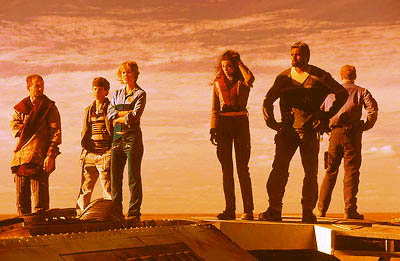 One would think with a good score, good cadence, bats with shark like teeth, huge termite hills like the ones found in Australia (probably because it was filmed in Australia) on an alien planet that humans are forced to land on, would provide at least a decent science fiction/horror film.  Even with all those elements Pitch Black fails to entertain.

The planet is arid and lifeless but when darkness sets in its inhabitants flutter around eating up the guests.

Director/writer, David Twohy fails to provide a coherent script and uses dimness so excessively that most of the time we are kept in the dark not knowing what is going on.  He also uses jumpy unfocused scenes which add to the confusion.  That method was used in Any Given Sunday with the same confusing dull results.