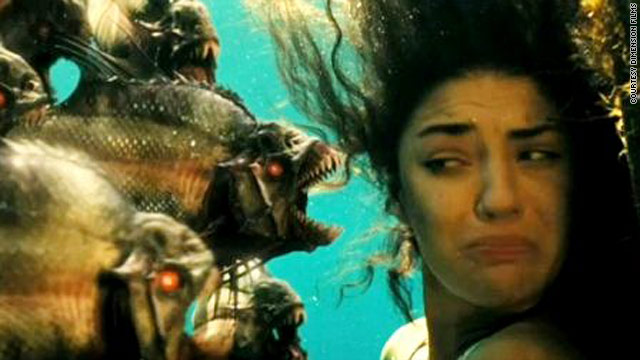 
Piranha 3D (a re-imagining of a 1978 Joe Dante film) stars Elisabeth Shue, Jerry O'Connell, Adam Scott and Steven R. McQueen and still has the seminal Jaws on its brain as an uproarious cameo with Richard Dreyfuss gets the gratuitous goofiness going.

The during a college break is Lake Victoria, Arizona (actually Lake Havasu) as McQueen's Jake has some babysitting to do with mom Julie (Shue) tied up as the local sheriff.

O'Connell (remembered way back from Stand By Me and more recently Jerry Macguire) is in town as a disreputable filmmaker out to for a shoot with all the virtually bare naked women (with plenty of pole dancing starlets). He needs Jake to get him familiar with the surroundings while Julie learns of something from an underwater rift that could reduce the population of her domain pretty hurry.

From the director of The Hills Have Eyes and the producer of 300, what we have here is plenty of that's incredible responses to all the mass chaos surrounding killer fish run amok. In an animated pic-like running time, scribes Peter Goldfinger and Josh Stolberg let plenty of story dangle within some taut and amusing sequences, taking advantage of the format similar to My Bloody Valentine.

Jake's "Girls Gone Wild" day out is hampered by a girl, a mugging Jessica Szohr, who has more admiration for him, while even his mom has some hot aspersions with a virile diver (Scott). So, clearly the characters and their dialogue are far more than subservient to aquaria Grand Guignol and nude synchronized swimming. It's like these gillful swimmers have been waiting for a fleshy buffet all of their lives.

Aja instills the picture with dark humorous strokes, making it almost, at times, like a spoof, albeit one excruciating for the faint-of-heart. The interplay between a game Shue (worthy of better roles) and Scott is fine as the droll and lurid seem to go hand in hand with all of the dismemberment and splitting, even of the reproductive variety. Eli Roth, Ving Rhames (solid in the Dawn of the Dead redo with Sarah Polley, Jake Weber, et all) help to fill out a decent roster with Christopher Lloyd as the resident ichthyologist.

You have to realize there's little depth-of-perception here, except for the filmmakers to raucously use to their advantage for the underwater voracious critters. It ultimately surges to a wacky conclusion in an unoriginal cheerful grisly way without the aural intonations which, along with darker insinuations, was a stroke of genius for Spielberg's classic.