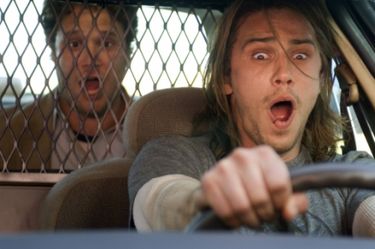 
Producer Judd Apatow seems to be on a comedic high these days, now with indie director David Gordon Green in Pineapple Express, a darker version of his recent late summer hit Superbad with a cautionary message attached. Those who really enjoy its pervasive, carefree nature and salty one-liners may have more of a buzz with them after leaving the theater.

The film, scribed by Seth Rogen and Evan Goldberg, from a story by the two and Apatow (apparently inspired by Tony Scott's True Romance), could have been trimmed a bit, and has a noticeably sharp visual style. Green and his ace lenser Tim Orr lend some crisp widescreen imagery to this tale of a stoner and a process server that seems to have taken the Apatow oeuvre to another level.

Some might see this raucous dope action comedy as a second-cousin to Midnight Run which worked strongly as a buddy picture, in large part thanks to the chemistry of Robert DeNiro and Charles Grodin.

Here, the rather likeable Rogen is the ordinary, flabby Dale Denton who does "business" with layabout, long-tressed, laconic Saul Silver, by a scene-stealing James Franco (who had a cameo as himself in last year's relationship serio-comedy Knocked Up). Apatow renews the successful relationship with the actor who teamed well with Rogen in the brief small-screen effort, "Freaks and Geeks".

The title is what Dale purchases from Saul, a high-grade of cannabis, whose description is best heard among a sizable throng. Saul claims that using it is like "killing a unicorn".

Rogen and Goldberg have fashioned another odd road picture, like the aforementioned autobiographical Superbad, with a frisky bad cop (an interesting turn for Rosie Perez) and a dangerous drug kingpin (Gary Cole). A panicking Dale (and Saul) are on the lam from the heavies once the prime product is carelessly left behind.

Thus, this trek for these two has much to do about dope, but not that dopey as the winsome prurience recalls other Apatow movies like Forgetting Sarah Marshall, if not as bold as some might have wished. The stakes are raised a bit in this case under a strain of paranoia during changing conditions.

Women have less prominence in this message movie which may be good considering the graphic nature amid the male bonding, sight gags, and slapstick. Amber Heard appears as the barely-legal girlfriend of Dale, while more menacing impressions are made by the minions (Kevin Corrigan and Craig Robinson) of Cole's terrifying Ted. Best of all in the supporting ranks is Saul's usually loyal middle-man pal Red, played by Danny McBride (also in Tropic Thunder). This rising thespian responds well to the character's nebulous motivations and indefatigable quality.

Yet, Rogen and Franco (who'll remind many of Sean Penn's aimlessly addled character Jeff Spicoli) have much screen presence together in this atmospheric, joltingly feel-good picture. Though perhaps a little too slapdash and experimental for its own good, Pineapple Express often blossoms from its actors and a technical perspective with effective cutting amid the latter lurid mayhem framed around montages and a b/w 1930s government-testing prologue. It's best to say that Apatow, Rogen, Goldberg, and Franco like "letting the monkey out of the bottle".