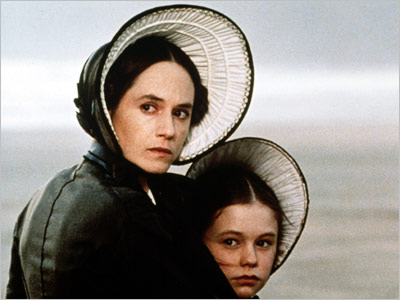 
Jane Champion directs Holly Hunter as Ada, a mute Victorian Scotswoman who journeys to colonial New Zealand to join in an arranged marriage with Sam Neil. Harvey Keitel as a settler with Maori face tattoos seduces her by controlling her piano and eventually finds himself caught by her passion, strength and sensuality.

Hunter's work is spectacular, her only lines are in voice-over as she tells the story of what is in her mind as she is puled from her husband, Neil, toward the less conventional Keitel. Her silent performance, the severe pull back of her hair and the range of her facial expressions are like that of a great silent actress. The sadness of her forced journey to New Zealand to marry a man she has never met represents the indignity women have suffered. He strength, which she shows with glances and glares from her eyes, makes it clear that she will not allow herself to be crushed.

Director Champion makes it easy for the audience to feel compassion for Ada but little concern is shown for her daughter, who is placed between the two men by her mother and is forced to view a crushing violent act by husband toward Ada. The husband's character is also confusing; he is quiet and almost passive, except for the one violent rage which he carries out against his wife.

A quality film which may bring Academy Award nominations, it is liberally filled with honest and open sex and sexuality. It is also filled with the quiet frustration inside Ada and not much traditional action. Champion has also chosen not to show any beauty in the colony on New Zealand, life is depicted as hard in a very rainy and muddy world.