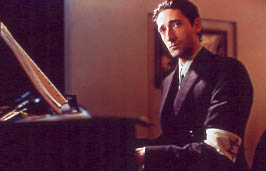 Different in scope and approach than the more powerful Schindler's List, Polanski works persuasively from noted pianist and composer Wladyslaw Szpilman's 1946 memoir, "Death of a City."  His scenarist, Ronald Harwood, depicts the struggles of a very bright musician who was deeply affected by Hitler's take over of Warsaw in 1939 by the Luftwaffe, his Nazis airborne aerial specialists.

Initially, Wladyslaw, acted with emotional restraint by Adrien Brody (Harrison's Flowers, Liberty Heights), somehow tries to make a life of the harrowing conditions inflicted on the multitude of Jews, especially his family, once they're remanded to a prison camp ghetto.  He realizes that, whether in the walled, sordid compound or on the streets, death is surely imminent.

Maybe The Pianist transcends credulity, yet in an emotionally understated manner - the Polish Jew is allowed to play a concerto on an undamaged, well-tuned grand piano in front of an Nazi soldier.  But, it's Polanski coming to terms with a childhood that had him fleeing the Nazis through a barbed-wire fence.  His haunting personal film, echoing Spielberg's passionate work in Schindler's List that use black-and-white cinematography to illuminate the atrocities and despair, includes preteen daughter Morgan in a stirring moment holding a bird cage.

The real Szpilman died in 2000 having lived long after the horrors which destroyed his family and Brody makes the terrifying plight cruel, in a brutally surreal sort of way.  And his maturing as a young adult actor is complemented by Polanski's starkly poignant work with lenser Pawel Edelman and designer Allan Starski.  A bombed-out Warsaw almost feels like an important character in sadly reliving the atrocities that reveals The Pianist to be one of the more deliberate, wrenching, non-documentary accounts of the Holocaust.