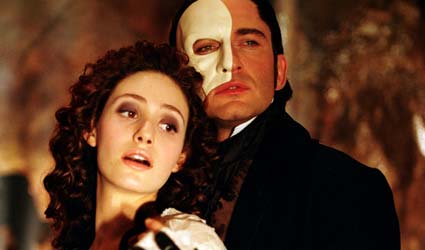 Andrew Lloyd Webber’s name is attached to this film version directed by Joel Schumacher with full visual and auditory assault as the casting appears to draw on a more youthful persuasion.

Phantom of the Opera on the big screen, as it continues on the Great White Way, after 16 years is a sumptuous spectacle that can still stir a viewer through Webber’s music, but lacks the needed emotional resonance of a Gothic love story set in an 1870 Paris opera house, Opera Populaire. Anthony Pratt’s production designs help give a rapturous texture in this tale of a beauty and a beast, but the interaction of Gerard Butler as the titular mad genius, Emmy Rossum as the comely ingenue, and Patrick Wilson as the Phantom’s dashing foe, Raoul, fails to excite the senses.

Rossum opens more opportunities for herself here, however, exuding a sweetness as soprano Christine Daae. Christine has been secretly trained for a big moment that the virile, haunted Phantom can provide from dastardly acts atop the stage when seen in his favorite Box #5. His desire is to make Christine a star and his lover, making things tough for the company led by its proprietors and resident soprano diva, Carlotta, an over-the-top, humorous Minnie Driver, the only cast member not to do her own singing, and speaking in a broken Italian accent.

There is a nice transition as the film plays mainly in flashback from an auction occurring in 1919 at the opera house with an older Raoul procuring the famous music box as Miranda Richardson’s Mme. Giry notices from a distance. Raoul recounting moments as he aims to wed his “little Lottie,” Christine, his childhood sweetheart, whom he at first doesn’t recognize.

It’s hard to cloak the impact of the songs right from the start when Christine performs “Think of Me.” Rossum was classically trained at the Metropolitan Opera House and it shows. Wilson (HBO’s “Angles in America”) holds his own with her in “All I Ask Of You” and has a big moment opposite Butler in a cemetery scene where Christine confronts her feelings for her dead father who could be her “angel of music.”

Of course, the organ comes alive in the title song and Butler does his best opposite Rossum in “Music of the Night” though not with the power of Michael Crawford, nor with the fright of a Lon Chaney. And some will like how the momentous chandelier scene is shifted closer to the music of “Point of No Return” in the last act. The viewer who especially loves what was done on stage adapted originally by Harold Prince wants to feel the wonder going on between the Phantom and Christine, as Raoul looms as a larger figure in a love triangle. But it all doesn’t illuminate in a horror, romantic template as one line from the Phantom holds true, “Abandon thought and let the dream descend.”