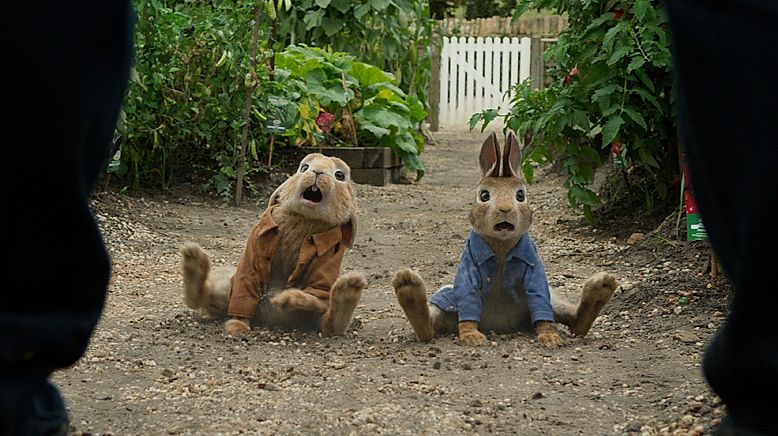 
Even with Peter Rabbit, along with Flopsy, Mopsy and Cotton-Tail this is not the traditional gentle tale written by Beatrix Potter for kids.  Peter here is more like the Road Runner taking on Thomas McGregor (Domhnall Gleeson) who has inherited his uncles cottage and more important vegetable garden.

The construction of the animal characters into a live action film with Rose Byrne and Gleeson as the human actors works smoothly and is has the quality to be believed particularly by kids who will be drawn to the Peter Rabbit character.  But this is a tough Peter Rabbit who leads his gang into the pristine garden of the McGregors filled with goodies that rabbits and other animals crave.

Filled with bashing jokes that repeat them selves the joy of an animated feature disappears quickly.  The use of berries, tomatoes, cucumbers and the like as weapons to attack the land owner become a repetitious battle that wears thin.  When McGregor uses an electric fence Peter switches the controls and MeGregor gets the shock along with a number of other humans.  The idea may be interesting but it's over use drags.

Bea played pleasantly by Rose Byrne is the neighbor who can't believe the cute little bunnies could be a dangerous as McGregor knows.  As the two live characters become close Peter believes he must end the relationship and banish McGregor particularly when Bea attempts to convince McGregor to leave the fence to the garden open allowing the bunnies to feast on the nicely growing garden.

Even with the slapstick interactions this Peter Rabbit doesn't inspire wonder or even comedy it just flows on and on with one joke that we don't laugh at very often.