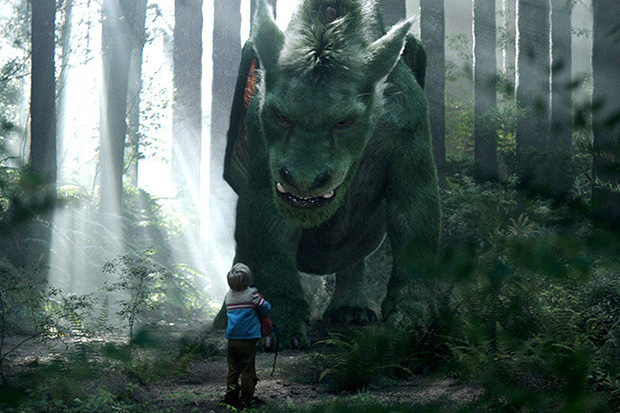 
Pete's Dragon is a delightful, visual movie with plenty of twists and turns, a little short on plot but long on family togetherness and magical adventure. The characters, actors and story will entertain you and make it worthwhile.

This starts out with a young boy lost in the woods after a car accident and he is adopted by a mythical dragon. He adapts quickly and we find him frolicking through the woods, running and flying with Elliot, the dragon who found and adopted him. We don't really get to know how he survived, why no one looked for him and why he didn't seek other human company, but he is happy and seemingly well fed so there is no worry.

The story doesn't do much to tell us how folks got to where they are. The storyteller in this story, charmingly played by an aging Robert Redford, asks us to know and believe that he once saw a dragon without any reason or explanation as to why we would be questioning him. His daughter Grace, played by Bryce Dallas Howard, is a park ranger and has an affinity with the forest where the dragons live but has never seen one herself. We learn pretty fast that it's because she doesn't BELIEVE there is one even if she's heard the story all her life.

The part of the forest hiding Pete and Elliot is somehow protected by magic with prevents them from being found out, and that the trees are in immediate danger from deforestation. The main bad guy, Gavin, is in charge of cutting down the trees and stumbles on the dragon. Karl Urban is convincing as the mean hunter and he and his workers track down and trap Elliot causing much discord.

Grab the popcorn - this story is about lost family and found family, and building others into your tribe to make a more solid structure. There is plenty of adventure and some harrowing moments with the most probable resolutions but never any real danger. Elliott and Pete are triumphant and teach us to do what's right and fly up, up, up into the clouds. You will be pleasantly entertained and come away feeling very good inside.