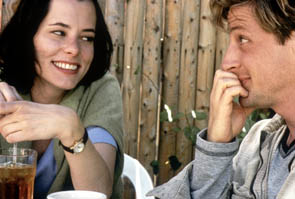 Anyone drawn to richly measured storytelling will admire the brains of Rebecca Miller's Sundance favorite Personal Velocity.  Her three little films which make up the nearly 90 minutes of running time center on frayed women who try to find meaning in their lives.

Miller is the daughter of playwright Arthur Miller and wife of Daniel Day-Lewis.  She has the services of a capable trio of actresses not often seen in big budget fare, Kyra Sedgwick, Parker Posey and Fairuza Balk.

John Ventimiglia's voice-over work in explaining the vignettes is done well enough to lighten up a more somber tone felt within them as three women are scarred in some way and begin to find a need to overcome a stasis in their lives.

Sedgwick is as good as she's been as Delia, a mouthy, battered wife in the first episode.  Her cocky side remained from her rebellious years as she wed her high school first love.  But, the abuse inflicted in her own family from her parents prompts the emotionally ragged mother of three to advantageously flaunt a younger, lost version of herself.

Miller then turns, as each tale has a tangential feel in connection through reality and illusion, to Parker's pungent book editor, Greta.  A new business opportunity is a catharsis that shed light on her marriage to a mind mannered trivial worker of a husband (Tim Guinee).

And the last segment features an affecting Balk in the part of Paula (a darkly creative person) who, in her early 20's, is surprised to find she is pregnant to a young man of Haitian descent.  A tragedy almost blind sides her, but Paula stays on the go to help a severely mauled hitchhiker.

Personal Velocity evokes a spirit to feminine empowerment with the telling performances of a cast heeding to the possibility of being able to turn things around, sometimes by chance.  And Miller relates her brief, intimate cuts effectively in a news bulletin as her low-budget effort puts direction and creativity into those who genuinely need it.