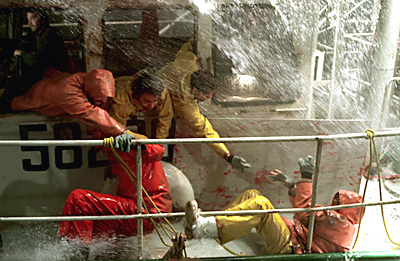 Prepare yourself to be caught up in if not blown away by The Perfect Storm.

Based on the novel by Sebastian Junger, Director Wolfgang Petersen (Das Boot and Air Force One) delivers a quality story that will not only keep you on the edge of your seat, but actually does the novel justice.

The film revolves around the perfect storm that formed as a result of three storms combining to create what was in 1991 a storm stronger than any in recorded history in the Gloucester, Massachusetts area.  Waves the height of ten story buildings were generated as winds of unbelievable power swept the ocean and coast.

Caught up in this are the crew of the Andrea Gail as they try to make a living in what are becoming depleted fishing grounds.  This six man crew of Captain Billy Tyne (George Clooney), David Sullivan (William Fichtner), Bobby Shaftford (Mark Wahlberg), Dale Murphy (John Reilly), Bugsy Moran (John Hawkes) and Alfred Pierre (Allen Payne) depart for new and hopefully more productive fishing grounds in the form of the Flemish Cap.  Their trip to the "Cap" is productive, but it is their return trip that is the story.

Unaware of the storm's intensity, the Andrea Gail loses radio contact  and enters what can only be described as an epic battle between man and nature.  Clooney as Captain Tyne is forced time and time again with life and death situations as is his crew.  "May Day!...May Day!..." the call goes out for help.

You are now following a U.S. Coast Guard helicopter crew as they attempt to save the crew of the sail boat Mistral and they are assigned the task of locating the Andrea Gail.  It is obvious that the crew is out of its league with this storm and runs into great troubles.  100 foot waves, unpredictable winds and great acting provide continuous edge of your seat action and suspense.  The visual effects are as good as you could ever expect!

You will come to know the characters from the 30 minute opening as Petersen forces you to personally invest in each and every one.  You come to know them as individuals not just characters.  This really pays off as nature once again proves we are just guests in the sea and will never be its master.  You cringe, duck and perhaps even bite your nails when walls of water the size of mountains batter the ship and crew.  You will experience tension, suspense and awe as the Coast Guard attempts to help.  At times you will feel as hopeless as the crew.  You are forced to acknowledge that on the sea there is no place to hide, no safe refuge and the size of your boat is meaningless.

For those who have read the book, or seen one of the many documentaries currently running, go see this film.  Reading is no comparison to living the adventure and when you exit the theater you will have come as close to living it as you possibly can.