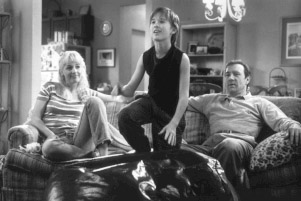 We expect Pay it Forward to be an uplifting positive experience with its three for one good deed pyramid expanding across the United States.  Haley Joel Osment's Trevor begins the idea: do three favors in response to the one received and the world will be changed.  Anonymous people and the people closest to Trevor begin to change but even the best notions have an unintended dark side.

Trevor is introduced to middle school by Eugene Simonet (Kevin Spacey), a precise man in perfect control of his life, who has burn scars spread across his face.  His ongoing assignment for the class is to do something for someone they can't do for themselves that will change them, it leads to Trevor's notion do it for three people and each of them do it for three more.

Trevor's single mother Arlene McKinney (Helen Hunt) works two jobs but she is losing respect from her son as she reverts to not-so-secret drinking.  Her black hair roots gleam under their blond strands and her dark make up shows the pressure and wear of a tough life.

We learn early on from Arlene that Trevor is determined to complete whatever he commits to; his plan is to place mom and his teacher together resolving Simonet's lonely life, his mother's drinking and his abusive father's return to the house.

As we learn of the complexity and pain in each of the lives close to Trevor, we see a bewildered reporter Chris Chandler (Jay Mohr) four months in the future receiving a new Jaguar from a stranger who has been effected by the pay it forward movement.  He travels backward tracing the source of the crusade, while we watch Trevor begin the movement.  The climax comes when they meet in the middle and the change the world movement is in full bloom.

Directed by Mimi Leder, Kevin Spacey carries us into the mind and heart of the lonely frightened teacher and Helen Hunt brings realism to the flawed but hopeful mother.  Osment (The Sixth Sense) delivers feelings of wonder, curiosity, intelligence and innocence to his role.  The beauty of Pay it Forward is in these performances, even more than the script.

The climax is plausible from Arlene's early warning but it is not pleasant.  Movements like pay it forward often enlarge in time.  It takes candle light and Field of Dreams traffic to prove Trevor's idea has taken hold.