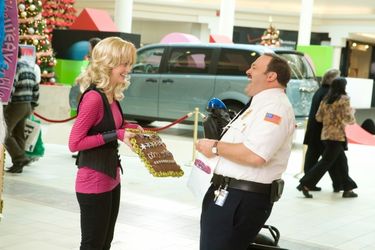 
Kevin James co-wrote and produced this silly, kid-friendly comedy. He stars as Paul Blart, a mall cop who wants to be a state policeman. He tries out for the squad over and over again, and although he does a great job on the physical portion of the entrance exam, he passes out before the finish line because of a sugar problem, not a good thing!

So, he goes to work every day and does his job. He lives at home with his mother, played by the delightful Shirley Knight, and his daughter. They're continually trying to find him a girlfriend, even going so far as to "beef up" his resume on an online dating service. But, Paul has found a girl he thinks is pretty great right at the mall. She works at the wig kiosk, and he does everything in his power to make her notice him.

Paul does his job by the book, patrolling the large mall on a Segway while breaking up customer fights over sale merchandise, and making sure that the elderly adhere to the speed limits on their motor scooters.

For a guy who takes his responsibilities very seriously, Paul is tested when a group of thieves on skateboards close down the mall and take hostages.

There's enough action and stunts to keep the kids amused, and James is such an appealing comedian, adults should enjoy his antics. He doesn't mind using his plus size for laughs and his average Joe personae makes him easy to relate to - and best of all, he's a lot of fun to watch.