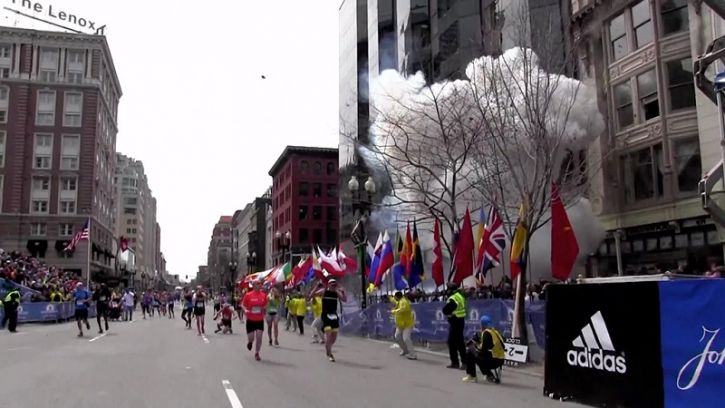 This film offers a dramatization of the events of the bombing and the subsequent manhunt of the  Tsarnaev brothers.  That being said, despite it being a dramatization and certain moments of the film may have been fabricated or at least played up nothing from the film felt wrong.  Peter Berg did a very good job handling this film with as much respect as one could possibly expect, especially as the events that took place only occurred a few short years ago.  One of my biggest fears going into this was that the film would feel exploitive of the events but after seeing it I left feeling that the film gave it as much respect as it deserved.

The story, outside of the parts we already know, is a collection of mini stories from those who experienced the bombing first hand.  From actual victims to the FBI who took command of the manhunt.  Mark Wahlberg, despite being the character who gets the most screen time in the film is not a real life character, rather he appears to be a combination of a few officers.  However, his character ends up being one of the main characters of the film.  But even so, this wasn't a movie about character development or focusing on each character for too long.  Rather the film tells the story of the events, and the characters are really only there for the ride.  That however isn't a bad thing as the movie didn't need any of that.

There are two major "action" sequences in the film.  The first being the bombing itself and it's chilling realism.  This part of the film moved me as it brought back the memories of the event so easily to me.  The scene was excellently shot and performed by everyone and truly captured the panic of the moment.  The second "action" scene was the showdown between the Tsarnaev brothers and the Watertown police department.  This was a well shot sequence as well as chaos erupted as the Tsarnaev brothers shot their gun and threw bombs at the officers.

I couldn't find anything truly wrong with the film.  I would wish that there was more plot cohesion between all the characters, but I realize in making a film based as accurately as you can to the real events, that just doesn't happen.  That being said, despite all of it's accuracies Mark Wahlberg's character, while nothing fundamentally wrong with him, did stick out as a character that didn't belong.  He showed up pretty much everywhere and while I knew while watching that he was a combination of many officers I couldn't shake that feeling that he was a fake character in an accurate retelling.

All in all Patriots Day achieved its goal in retelling the events of the Boston Marathon bombing as accurately as movies could allow.  And while there were some issues with its "main" character, there was nothing that truly held the film back.  It is a movie definitely worth seeing.  However, it should be mentioned that this film did a good job bringing back real memories from those days and that may make some viewers feel uncomfortable.  This is not a movie you can escape into, rather one you face head on.