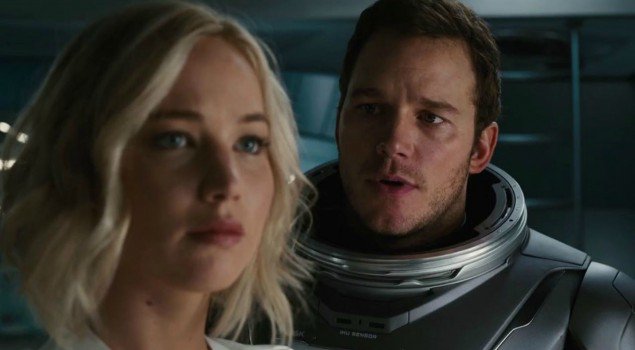 
Passengers is a beautiful failure.

Director Tyldum has cobbled together stunning visual effects and art work as the background for a limited script.  The beauty of the space ship Avalon crafted with circular rings and a smooth central core as it floats in space on a 120 year mission to establish a human colony on the planet Homestead II is spectacular to watch.  The crafting of the design inside the enormous vehicle is far over the top of what a space vehicle could carry, but it is wonderful art work filled with crisp modern lines, curves and circles designed to be comfortable for the 5000 colonists who are on their way to a new world.  The swimming pool which threatens Aurora (Jennifer Lawrence) at one point sits in a bubble that looks out on the star filled universe.

The journey led by a staff of more than 200 folks and the 5000 pioneers who are held in hibernation pods with the expectation of awakening 4 months before landing on the new planet.  When a glitch occurs Jim Preston (Chris Pratt) finds himself released from his pod with 90 years remaining on the trip.  Part of the story is the search to determine what caused his early awakening.

After a year with only the android bar tender, Arthur played beautifully by Michael Sheen to talk to Jim searches his sleeping travelers looking to one to awake and share his life.  He chooses well, picking Aurora played by Jennifer Lawrence as the fellow travler to remove from her long sleep and share the next 90 years with him.  It appears that Aurora is Sleeping Beauty.

After a smooth year of affection between the two stars Aurora learns that Jim removed her from her status and has her in the same trap he is in.  Each will live a normal life on the very comfortable space ship but will never reach a planet again that places serious challenges to their relationship.

Laurence Fishburne as Gus Mancuso is an officer who is also suddenly released from his chamber by the glitch in the massive system which controls the vehicle and every function within.  The action portions of the film bring excitement as Aurora and JIm face the challenge of making dangerous repairs to the vehicle which is near to destruction from an early accident, but the beauty on the screen is not supported by the script which is generally thin and absolutely flat at the end.