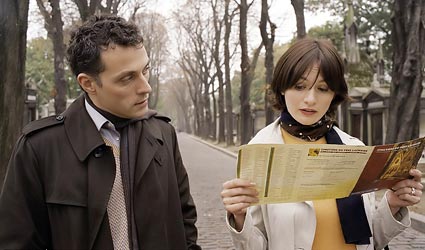 
The title of this lovely mounted, if variable omnibus translates as "Paris, I Love You". An international array of talent in front and behind the camera comes together in a way that gradually gives meaning to the City of Light. Eighteen mini-features have a variety of texture in what could be an arthouse cousin of Love Actually.

From Montmartre to 14e Arrondissement, each vignette gets its name from a part of Paris with plenty of interaction with the city and a well-represented look at relationships. Whether its with a stranger or something long-term, there is something that nearly every person can identify with - age difference, love lost, engagement, marital embers. And, some of the encounters have an unusual, if intriguing touch, whether it being the Tour Eiffel's mimes or the Quartier de la Madeleine's vampires.

The Coen Brothers and Alexander Payne leave an impressive mark when it concerns tourists as played by Steve Buscemi and Margo Martindale, respectively, in Tuileries, and the aforementioned, finally revelatory 14e Arrondissement. Class and social issues are addressed, as well as drugs, violence, and grief in ones like Place des Fetes, Quartier des Enfants Rouges, and Quais de Seine.

If some of them don't quite gel in their brief time, like those directed by Christopher Doyle, Nobuhiro Suwa, or Wes Craven, the acting is more often than not effective. The most striking thing about this ode to Paris is how technically proficient it is, given the tonal changes, which also is a product of crisp editing. And from Emily Mortimer to Gena Rowlands to Miranda Richardson to Juliette Binoche and Willem Dafoe as well as Bob Hoskins and Fanny Ardant, there is nearly an actor with which one can find something unique about human nature and love, actually.