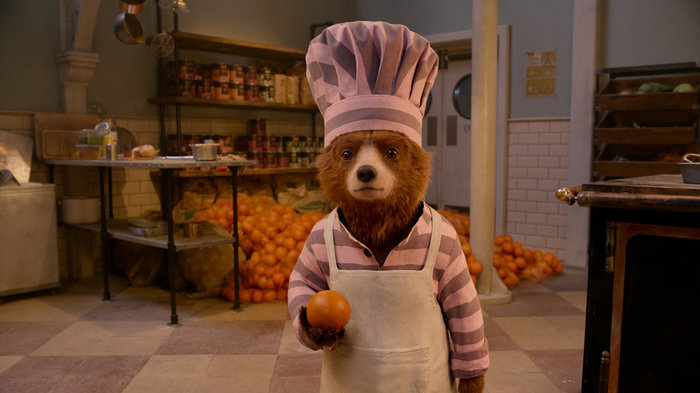 
This charming live-action sequel to the 2015 hit about Paddington the little bear from Peru who is taken in by a quit wonderful London-based family, is every bit as smart and entertaining as its predecessor

It begins with Paddington (soothingly voiced by Ben Whishaw) looking for a special birthday gift for his Aunt Lucy, who lives in Peru and is about to turn 100.

He finds a lovely pop-up book featuring London landmarks in an antique shop.  He can't afford the book, so the owner says he will hold it until Paddington earns enough money to buy it.

Paddington has settled in well with his adoptive human family, Parents (Hugh Bonneville and Sally Hawkins) brother and sister (Madeleine Harris and Samuel Joslin and housekeeper (Julie Walters) love and care about him. His neighbors are also part of his daily routine and they're happy to be greeted by the cheery bear each morning.

Paddington does some household chores for the neighbors, and after some funny mishaps, settles in on window washing to make enough money for the book.  But, before he can purchase it, a thief steals it, leaving Paddington as the prime suspect. Its stolen by a magician who's a master of disguise, played by a delightful Hugh Grant, who almost snatches the spotlight from his furry little co-star.

Paddington is arrested, convicted and hauled off to jail.  He knows he's innocent and expects to be vindicated soon, so he makes the best of his situation.  With  his sweet demeanor, the hardened criminals soon start baking pastry and enjoying his delicious marmalade sandwiches, of course. Soon the prisoners are singing and dancing in the kitchen and sharing grandma's recipes.

Everywhere he goes, Paddington's sunny disposition makes bleak situations seem more hopeful  No need to worry, Paddington's friends and family help clear his name and everything works out for the little guy in the end.

Director Paul King gives the audience a great story that's filled with interesting characters and fantastic visuals.  From the wonderfully colorful neighborhood, to the pop-up book that comes to life, to the eclectic family who has Paddington's back, it's a film that will appeal to young and old, because most of all — it has heart.