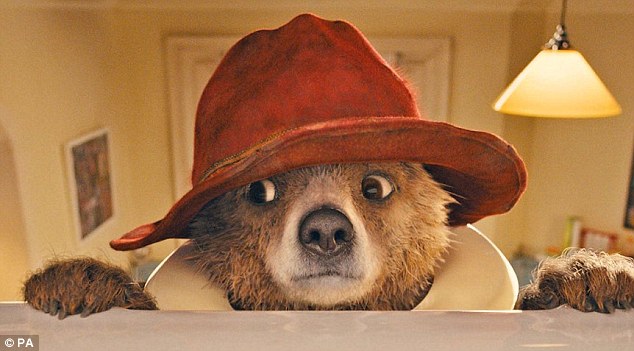 
I knew I would like this live action family film when I laughed out loud during the trailer, and thankfully writer/director Paul King's Paddington does not disappoint.

Based on Michael Bond's beloved children's books, the CGI talking bear (voice by Ben Whishaw) is everything you'd want in a bear, he's polite, self-sufficient and above all — fun.  The CGI is so good, you'd swear he was real at times.

After his Peruvian forest is destroyed by an earthquake, his aunt puts him on a ship headed for London.  An English explorer had once told her that his homeland had kind people who would welcome strangers into their homes.  So off he goes wearing a red floppy hat, a suitcase filled with marmalade and a tag around his neck asking for a home.  But, arriving at the Paddington train station, the young bear discovers that passers-by are too busy to care about him.  That is, until Mrs. Brown (Sally Hawkins) stops and asks to help.

She names him Paddington after the station she finds him at and her disapproving husband (Hugh Bonneville - Downton Abbey) allows him to stay at their home one night until the authorities can be notified in the morning.  But you just know that even though Paddington gets into a load of trouble, dad, mom and their two kids will warm up to the sweet bear.

Paddington is a magnet for plenty of silly situations.  He floods the Brown's bathroom, gets himself covered in scotch tape and starts a kitchen fire.  He also unwittingly gets the entire family involved in an adventure when an evil taxidermist (Nicole Kidman) tries to kidnap him and make him an exhibit in the Museum of Natural History.

There's a lot to like about this comedy.  The setting is perfect, the Brown's home is like walking into a doll house; bright colors, rooms cluttered with interesting knickknacks, the son's room filled with toys and science projects and best of all, a giant tree painted in the two story hallway.  Also, the family is ideal; warm, a little wacky but lovable, what talking bear wouldn't want to live there!

A few scenes could be scary to younger kids, like the kitchen fire, a menacing Kidman with a knife and dart gun and adult drunkenness.  But, for the rest of the family, this is a charming and entertaining adventure.