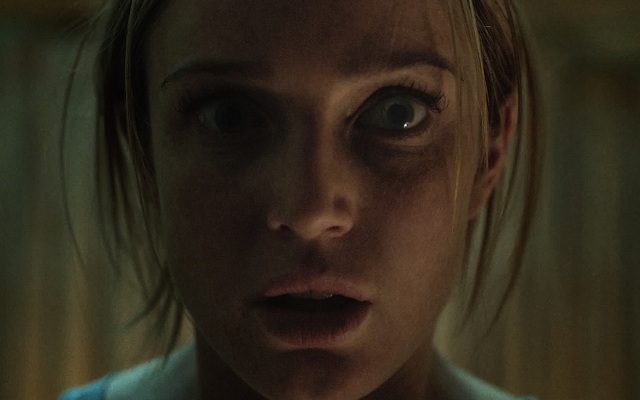 
Helmer Nicholas McCarthy makes a modestly inviting, if familiar horror fest from his own short film that may be all the better from not getting too wound up in its storyline.

The Pact looks to be influenced by the likes of "Paranormal Activity, if not the serial-killer genre a bit, and stars Caity Lotz, Agnes Bruckner, and Casper Van Dien.

Motorcycling Annie, an impressive Lotz (who was on TV's Mad Men for three episodes a couple of seasons ago), is back home under difficult circumstances with the death of her abusive mother. She learns of formerly addled sister Nicole (Bruckner) suddenly disappearing when inside the house. Babysitting Nicole's daughter, their cousin Liz (Kathleen Rose Perkins) even vanishes during a visit to the same residence. Hence, Annie, visibly shaken, retains nearby officer Creek (Van Dien, remembered of course as Johnny Rico from the sci-fi pic Starship Troopers) to look thoroughly into this situation; what turns up for them, however, is hardly what they could have imagined.

To augment the eeriness, the filmmakers dampen down the usual bombast when it comes to the sound mix and soundtrack itself, as well as keeping the line readings on a short lease. However, aspects regarding those disappearances and apparent apparitional (Google and Facebook, indeed) aplomb are a bit of an enigma to say the least, including how the title relates to everything.

In spite of that, McCarthy has enough things up his sleeve to keep one from getting too discouraged or disinterested enough to be playing with their PEDs, even if the early passages don't seem to generate much of rhythm. The Pact is able to rebound and provide a sufficiently creepy climax with the sullen presence of Lotz worth following. Dien doesn't have do too much to register favorably, while Bruckner makes the most out what amounts to a very brief, if one-scene turn. Haley Hudson is also advantageously macabre as a supernatural intermediate. Unlikely to spark little in the way of theatrical business, what doesn't baffle may be unnerving enough from a less-is-more philosophy.