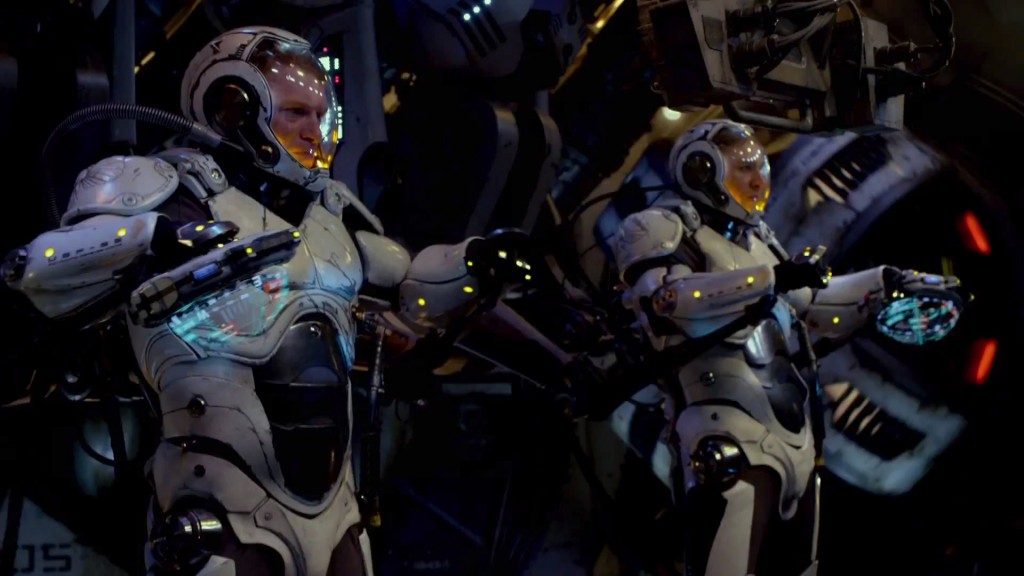 Pacific Rim (starring Charlie Hunnam of F/X's Sons of Anarchy, Idris Elba of Prometheus and Rinko Kikuchi of Babel) allows for del Toro's affection of Japanese monster movies and anime to show amid the clamorous, if thrilling set-pieces and corny familial sentiment. The initially stimulating but gradual bombastic overload with a touch of humanity may remind some viewers of a Transformers style turbo-ride gone wild as the volume is definite up for the line-readings to match the intense attacking and assaulting on screen.

It happens that in the not so distant future humungous otherworldly creatures named Kailua have managed their way through the ocean floor from a seismic shift causing mankind to react to the devastation wrought on humanity through telepathic robot behemoths known as jaegers. The jaegers have hit a snag from the latest monstrous wiles putting new commander Pentecost (Elba) on the spot. Getting the right pilots for this dire situation is imperative for the virile glowering Pentecost. It turns out the washed-up Becket (Hunnam) as well as Down Under father/son pair (Max Martini, Rob Kazinsky) could be up for the splashy, escalating mayhem, as well as Kikuchi's untrained protege of Pentecost.

While del Toro (who help with the plot on The Hobbit) along with scribe Travis Beacham really don't have much of a structural grasp on the narrative it tries to loosen things up romance wise through probing scientist Newt (Charlie Day of Horrible Bosses) and British colleague (Burn Gorman) as well as romantically with Becket and the fetching assistant. It helps at least in a couple of scenes to have del Toro regular Ron Perlman as a dealer in the Hong Kong underground which provides a somewhat less conventional setting to offer some well-needed levity.

Too bad on drawing an immersing spectacle from tradition doesn't allow for much dimensionality at least in story and character with the more explosive, extensive confrontations (after a key discovery) having a distinctive nocturnal glow. In turn the relentless situations can't belie predictability nor invite logical sense or taut persuasion at least like other recent apocalyptic fare like the Brad Pitt World War Z where the occurrences and survivors aren't really in question. A formulaic visually extravagant throwback could have been a resonant offspring of Alien or yesteryear's They Came From Outer Space in need of less emotional baggage and more tongue-in-cheek wiggling from a filmmaker unable to get to the rim with a reliable A-team of a cast and crew.