OZ the Great and Powerful 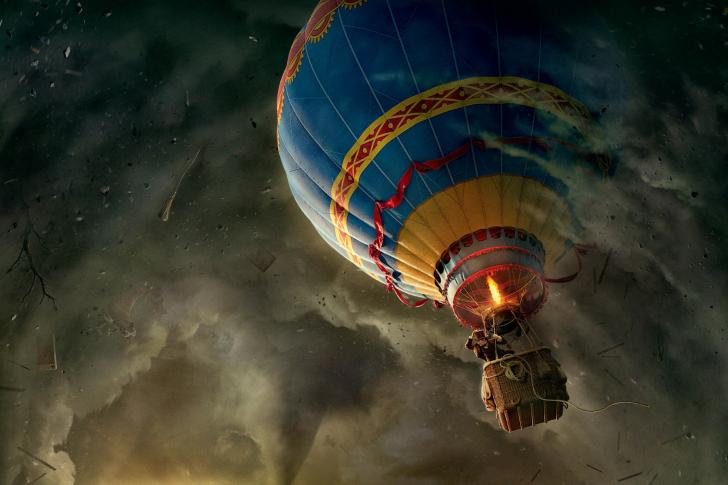 
James Franco's Oz fits right in with Frank Morgan's original film from 1937.  This is a prequel and it shows the huckster Oscar Diggs playing with magic in a carnival in dusty Kansas.  He's a faker to an extent as we learned Oz was at the end of the earlier film

Setting the atmosphere to fit into the stye if the 37 film director Sam Raimi begins with a small black and white screen as the future Oz works at making a living and seducing young women as a magician.  His escape in a hot air balloon is prompted by his need to escape an angry strongman father.

His trip in the air is enhanced by a tornado and he finds himself in a new world as the screen enlarges and becomes filled with dazzling color as the 3D process draws us into the world of Oz.

The colorful land is also occupied by three witches, Gilda the good witch (Michelle Williams) Theodora/The Wicked Witch of the West (Mila Kunis) and Rachel Weisz is Evanora.  Kunis originally appears as a dressed in red beautiful young women who is attracted to Franco.  Later she becomes the green Wicked Witch far different from the casting for the witch in the 37 film when Margaret Hamilton was told what other part would she expect to play in Oz.

Zach Braff voices Finley the flying monkey who joins Oz and the China Girl voiced by Joey King, as the reluctant hero is pulled into the role of the Wizard by Michelle Williams, the good witch.

The challenges to reaching freedom for the people of Oz lead by the fake wizard are provided by Evanora who seduces Theodora into biting a green apple which turns her into the wicked witch.   There is also an army of soldiers  and and flying creatures which are committed to stop Oz from taking his place as the great wizard.

Oz the Great and Powerful fits smoothly in front of the original it creates the atmosphere from the beginning and transports us into a stunning world of color, spectacular flowers, birds and butterflies along with Munchkins, farmers and tinkers who combine with luck and Oz to battle evil

The 3D here is also very effective it draws us into the film rather than throwing things out at the audience.  We can tell this is a Disney production, in one of the opening scenes in Oz is made to feel like a ride down splash mountain and the beauty of the floral landscape reminds us of Epcot in Florida.

It for for kids and will be well received by the fans of the classic Judy Garland film from the past.