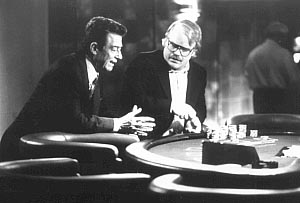 Owning Mahowny is a low-key drama that convincingly draws you into the world of high-stakes gambling.  Philip Seymour Hoffman brings a scary addiction to milquetoast Canadian banker Dan Mahowny who became a high roller back in 1982.

In a way, some tautly filmed gambling scenes in Atlantic City and Las Vegas go a long way to make up for a deeper sub text into a driven grubby man compelled to win big by embezzling huge sums of money after a promotion.

While Minnie Driver looks too unglamorous as Mahowny's oblivious bank teller girlfriend, John Hurt excels with unctuous hospitality in a quality backup as a casino proprietor.

Gary Ross' novel has been effectively adapted to the screen by Richard Kwietniowski with a standout Hoffman beating the odds through an overweight, sweaty fellow who has a "financial problem."