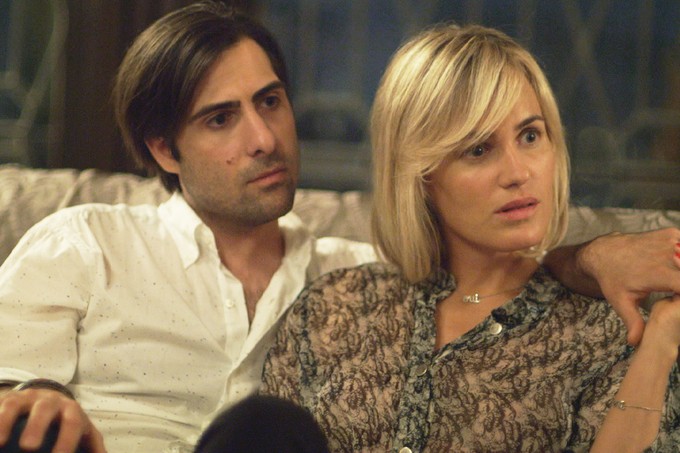 
An unpredictably awkward low-budgeter from Patrick Brice under the backing of Mark Duplass (maker of Cyrus"and Baghead) has a sweet concise candor to it. Framed by those embarrassing walk-in moments that many parents can relate to but wouldn't admit to.

Adam Scott, Taylor Schilling, Jason Schwartzman (in many a Wes Anderson film) and Judith Godreche are the principals of The Overnight which seems like it went through much editing with improvisation key an odd, if sometimes interesting pungent unwinding.

Scott and Schilling's Alex and Adam have relocated to L.A.'s east side from Seattle with their young son (R.J. Hermes) and get into conversation with denizen Kurt (a decent Schwartzman of Listen Up Philip) whose son (Max Morrit) enjoys the company of their son at a kids outdoor birthday party. The newbies accept an invitation to Kurt's swank place for a "pizza date."

After meeting Kurt's beauteous French missus Charlotte (Godreche) a night of wine and pizza becomes more as the dialogue gets more personal and revelatory with the lighting of a bong (a little different though than Ted 2). Scott and Schwartzman are part of the most outrageous moments from a rare visual artistry and skinny-dipping as well as poolside frolicking that make them resonate most in the wittier interludes.

Emily's wondering what's really happening to a liberated Alex and pretty skeptical about their new friends, but Bryce is more of a shrewd guiding force than you'd expect considering the edgy, tidy packaging of complicate lives intersecting in "swinger" fashion. Open-ended and a tad shrill "The Overnight" may be, it still has that off-center trenchant feel to it that has its way with honesty and confusion.