Our Brand is Crisis 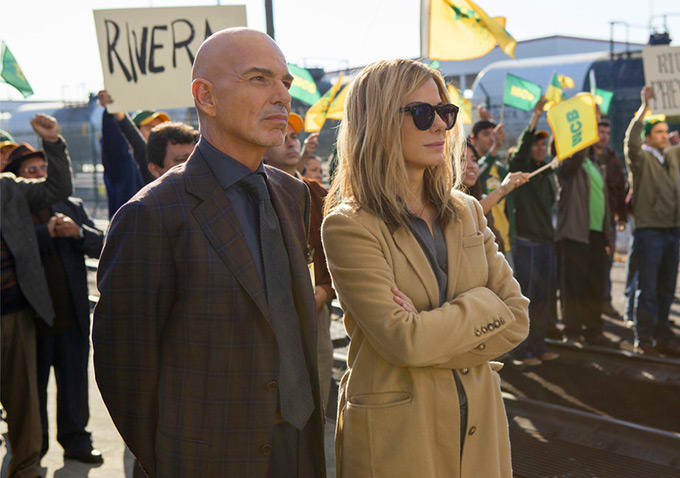 
Sandra Bullock's performance is stronger and more interesting than the script of Our Band is Crisis,  it is similar to Michael Fassbender work in Steve Jobs, Bullock plays a character that has a cold strong direction when it comes to carrying out a political campaign  just do what ever to win the election is her motto.  She is harsh and comical at the same time.  Bullock's Jane agrees to help win an election in Bolivia for Castillo (Joaquim de Almeida) who is far down in the polling when she arrives on the scene.

The film is not truly about politics it is about the background behind an election campaign.  The issues brought forward in this script fit more  in the recent Greek political crisis having to do with a serious financial problem which is at least out of the control of the new leader no matter who is elected.  Jane has the job of selling her candidate but when the film edges toward seriousness it quickly catches itself and blissfully plows on in a series of actions and reactions between the two stars who are in opposing camps. Jane pushes a phony flyer causing Pat Candy (Billy Bob Thornton) to act forcing his candidate to deny the accusation which brings it further to the surface.  She gets him on that one and later slips a quote to Candy which she knows he will steal and when his candidate uses it we learn it is a quote form German leader during World War II.

This is a comedy built around serious issues in a third world nation where there are significant differences in wealth and culture on a tapestry silliness. Jane who is referred to as Calamity Jane is frazzled and burnt out and is physically effected very negatively as she attempts to function in the high latitude in Bolivia. Bullock handles the fuzzy tired consultant role rather nicely, keeping the mode light and filled with comedy.  This is a black comedy, because it shows the dark side of behind the scenes in a political campaign all tongue-in-cheek which keeps us smirking and laughing at the antics of the candidates and the handlers behind them. Joaquim de Almeida is perfect as her candidate, white streaks in his hair and a square jaw, he looks like a handsome leader sure of himself even when he is twenty eight points down in the polls.

Zoe Kazan is a research expert who always has the stats on the end of her tongue and is always right on when Jane needs support for her point of view. Kazan looks like a fourteen year old with bangs who couldn't possibly know what she does know.

It is rumored that the original character was planed to be a man but Bullock got the part and obviously it was rewritten for a woman and she carries it of beautifully.

I am reminded of Robert Redford's The Candidate displaying the messy process which can occur during a political campaign.  What is important about this film is that is removes the idea that political campaigns are well planned and executed events. They are short periods of critical organization filled with stumbles, errors, mistakes and a little bag of tricks which sometime work, but often backfire.

Bullock has the skill to look serious as she bumbles her way through this story.  Our Brand is Crisis doesn't feel complete as the credits role, but Sandra Bullock's Calamity Jane is a delight to watch.