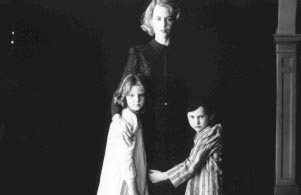 Take an isolated stone mansion, surrounded by thick woods, add some eerie fog, moving furniture and ghostly whispers, and you have the makings of a thriller.

Nicole Kidman plays Grace, who lives in a mansion located on an island off the British coast during World War I with her children, Nicholas (James Bently), a frightened little imp and his older sister Anne (Alakina Mann), who is independent and stubborn.

Grace's husband enlisted to fight and has been missing for a year and a half.  So the family lives alone in the 50 room house until three servants show up at the door looking for work.  It seems that the previous staff up and left in the middle of the night without notice (I wonder why?).

Mrs. Mills (Fionnula Flanagan), a motherly type with a sinister smile, is hired as housekeeper, Lydia (Elaine Cassidy), a young mute, as maid, and old Mr. Tuttle (Eric Sykes) as the gardener.

Most haunted house films use either the dark of night or a storm that blows out electricity to heighten the scare factor.  The Others, however, uses a unique premise to accomplish the same effect.  The children suffer from a rare disease that can kill them if they are exposed to light brighter than a candle; so Grace enforces strict rules to protect her children.  Drapes have to be drawn, most of the furniture is removed so they won't bump into it in the dark and each door is locked after entering or leaving a room so the kids won't catch a glimpse of light.  The rituals increase the creepiness immensely.

The child actors are great.  Especially Mann who shows an extraordinary talent as the petulant Anne.

Kidman is also effective in a difficult role.  Her character is a woman who had the gumption to withstand German occupation, yet is slowly losing control of her surroundings.  Slowly, is the key word here.  Director Alejandro Amenabar builds suspense very slowly.  There are no special effects, curdling screams or grotesque monsters, but the chills are there.

Along the lines of another psychological thriller, The Sixth Sense, The Others isn't quite as effective, but it tells a good story in a thrilling way.