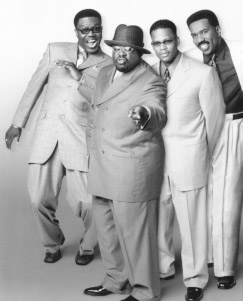 The Original Kings of Comedy

Spike Lee's The Original Kings of Comedy brings down the house at a sold out Charlotte Coliseum.  The laughter is contagious in a packed multiplex auditorium.  What we see is a lengthy, lively concert film that enables the viewer to have a VIP pass to a concert tour that has black audiences applauding and falling out of their seats.

Starting in 1997 the Kings of Comedy tour has featured varying lineups of fresh, vibrant black comedians, and Lee's digital video film has four of the most entertaining ones on tour: Steve Harvey, D.L. Hughley, Cedric the Entertainer, and Bernie Mac.  Seen together behind the scenes playing cards in a hotel or basketball on the basketball court, these different stylists complement one another on and off the stage.  Over a three day shoot, this personal live experience vocalizes with tenacity and truth on contemporary black culture.

The Original Kings of Comedy relates to its audience as Lee has done in the past with other more dramatically potent films like; Get On The Bus and Clockers.  The humor often works from the pain of everyday life and the passionate director and his stars pay their responsive tribute to the likes of Richard Pryor, Eddie Murphy, and Martin Lawrence.

The comedians do their stuff that is the best of BET and Def Comedy Jam with MC Harvey starting off and doing little bits before introducing the others.  Known from his WB self titled show, Harvey excels through his Pryor like looks and sound, and gets the crowd jerking in their seats with hip hop versus old school music, as he uses the sounds of Marvin Gaye to swoon the crowd, in the ultimate black love song.  A dapper brown suited Hughley elicits laughs from racial discord, through candid talk about anorexia, bungee jumping, and Titanic.  Cedric, who may be the most congenial and least deft of the quartet, uses a Run DMC persona, jesting on the possibility of a black president and simulating a shuttle flight to the moon by a brother.  The eldest in Mac has a grasp of rage against kids (once they can talk back) and uses his eyes in anecdotes of adopting his drug addled sister's kids and the conflict between the bus driver and a stuttering child.

While it may not be as tightly drawn as one would expect from Lee, The Original Kings of Comedy mostly does all the right things as Lee and his provocative stand ups have smartly fed off its audience in galvanizing acerbic wit from the roots of urban life.