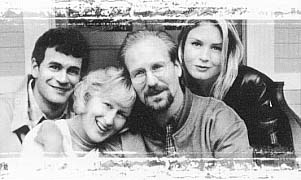 One True Thing explores a close family that is far apart.

Kate (Meryl Streep), a traditional mom, is embarrassed that she has no outside work to flaunt with other women.  At the same time she loves her homemaker role, having kept her family together and provided the foundation for her husband's (William Hurt) life.  Kate's strength shows up late in the film; initially she comes near to proving she has little to offer, just a clean house, pastry and great holiday parties.  Husband George teaches literature and has far more confidence.  He may not even be true to his devoted wife.

Though it may be blasphemy, Renee Zellweger as Ellen, is more effective than Streep in a role that has rotating dimension.  Filled with her father's ego and ambition, it takes her time to feel the true things her mother has quietly taught her.  The brother, Brian, (Tom Everett Scott), is the only one who is close to escaping from the trap that engulfs the Gulden family.

Tension belies the strain and the love.  Ellen wants to be her dad; she is a writer and, like him, work is her life.  When the bonding force in the traditional family begins to falter (Mom has cancer) the cohesive surface breaks.  Ellen is forced to care for her mother, requiring her to give up her growing career and her lover.

The challenge of children coming to grips with the strengths and weaknesses of their parents can create chaos and fracture the relationship forever or it can become an open door to enlightenment and understanding.  As Ellen learns why her father is late every night and who the mysterious driver of the Saab is, she discovers his limitations and insecurities, which her mother has known and accepted for years.

The find hand of director Carl Franklin, a Pulitzer Prize winning novel, expected brilliance by Streep, a powerful performance by Zellweger, and great support from Hurt and Scott shouldn't miss the mark and it doesn't.

It is rated R for language.