The One I Love 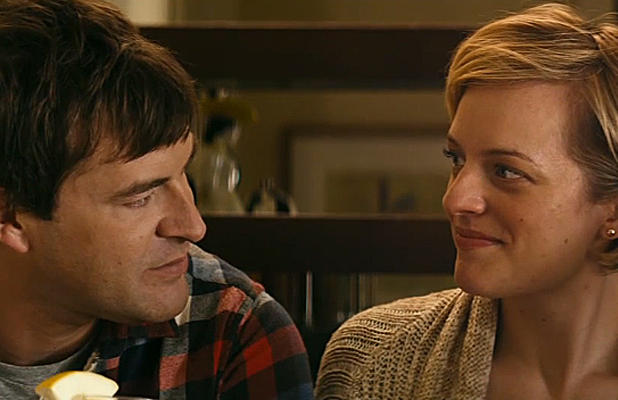 
The plot machinations by scenarist Justin Lader in accordance with an ideal production relevance when it comes to lensing, score, effects, and editing as well as ad-lib from its leading twosome, Mark Duplass (Your Sister's Sister) and Elisabeth Moss (known mainly from perennial Emmy-nominated series Mad Men) help elevate this oddly affecting relationship drama. One that definitely has connections to the lives of some folks, even if its Twilight Zone influence does make it feel that an imaginative, personal episode has been unduly protracted.

Charlie McDowell (son of Malcolm McDowell and Mary Steenburgen) directs the very modestly-budgeted The One I Love in an earthy way that looks at marital lassitude as on-lookers will wonder about the tangential unlikeliness from a remote couples retreat suggested by a therapist (Ted Danson) for Ethan (Duplass) and Sophie (Moss) after talking things through has gone nowhere.

An opportunity to salvage an exciting, clandestine past at a domicile with guest cabin promises what has been absent in their lives for some time before Sophie's return to the main residence leaves a now arisen Ethan in a different emotional state that apparently doesn't mitigate their apparent irreconcilable
differences.

A sci-fi spin on the ups and downs of romance references the Rod Serling anthology as the cabin contains the primary inscrutability of a foreboding gradual reveal that logically won't add up to some discerning, supposing viewers who might be left a more than a little befuddled. But, the mumble core apotheosis in Duplass helps carry the unexpected narrative turns with dexterity and Moss nicely balances off of him. Some may feel the filmmaking invites a kind of gimmickry but a deft, supernaturally felt The One I Love is dedicated to the real possibilities of why divorcing is all too common.