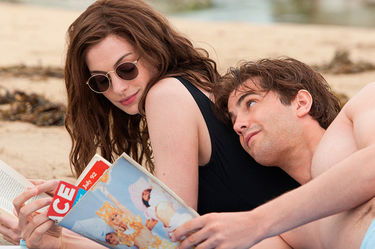 
It's hard to find the resonance of tracing a relationship over two decades each year even with appealing actors like Anne Hathaway and Jim Sturgess under the direction of Lone Scherfig.

One Day begins on July 15, 1988, (St. Swithin's Day) as Hathaway's Emma and Sturgess's Dexter attend university in Edinburgh. It looks as if there are possibilities for them, but obstacles stand in the way of something meaningful for them.

In David Nicholls' script adapted from his novel, Dex goes from being a TV host to a chef while having a daughter with Sylvie (Romola Garai). Similarly over the years, Emma becomes a teacher after grinding out as a waitress and is in a rut with comic boyfriend Ian (Rafe Spall). Of course, the premise involves the 'what if' and 'what could happen' scenarios played out to mostly underwhelming effect despite a relatively consistent relaxed atmosphere as time passes by.

Nicholls definitely has passages of humor and pathos ripe for the picking, but his storytelling has too much of a superficiality about it. Scherfig (who displayed much skill in An Education) doesn't really have a solid handle on the Emma/Dex dynamic. Perhaps like the wavering accents of an uptight, demure Hathaway and Britain's Sturgess whose character may be a little annoying, but more fully developed. The milieu established for these characters is viable enough, but can't make good on its off-the-cuff, episodic nature.

That's not to say that Hathaway (better opposite Jake Gyllenhaal as an ill, lovelorn woman in Love and Other Drugs) and Sturgess (21, Across The Universe) aren't able to formulate sympathetic qualities as Scherfig again is attentive to the culture of expansive timeframe without letting it all get too obtrusive.

Unlike An Education, however, it's hard to find any payoff or emotional pull which never realizes the ardor from situations that connects to couple and individual maturity even if the conclusion may be a little startling. Maybe, the case is in the casting as Hathaway and Sturgess don't appear to be the right match (or plausible chemistry) as many may wander what Emma really notices about Dex. Unhappily, the other characters don't offer enough interest or support given their contrast. The usually reliable Patricia Clarkson (Friends With Benefits), in particular, is a bit of a letdown as Dex's mom.

One Day lacks a nourishing cinematic quality - more sweet, dreamlike, and too safe to tackle more serious themes presented to examine the ups and downs to inspire rather than frustrate.