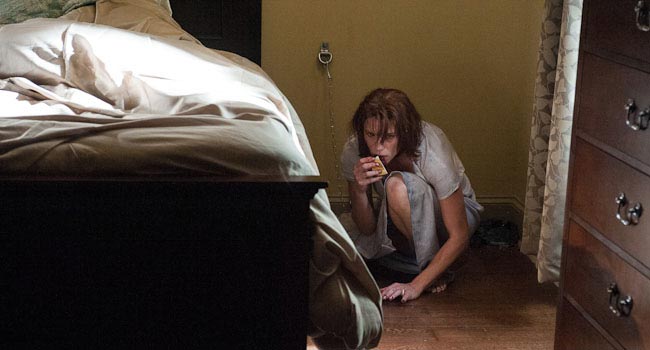 
The first obvious flaw in the film Oculus is the title. The word has absolutely no connection to the movie whatsoever. According to the Merriam-Webster Dictionary the definition of OCULUS is:
1. a circular or oval window
2. a circular opening at the top of a dome

"Ocular" means: connected with the eyes or vision. Did director/ screenwriter Mike Flanagan even know the difference between the two words?

His film, Oculus focuses on an ancient mirror, "The Lasser Glass," which can cause those who gaze upon it to commit horrible crimes.

Jennifer Lawrence clone (Karen Gillan) plays Kaylie Russell, who wants to prove her younger brother Tim (Brendon Thwaites), was not a murderer. He had been institutionalized as a child for supposedly killing his parents. She believes the mirror compelled him to do it. When Tim is released, Kaylie finds the mirror at an auction house, and brings it back to the family home to prove his innocence.

'The Lasser Glass' mirror had been hanging in their house ten years earlier. Kaylie concocts an elaborate plan to destroy the mirror, and exonerate her brother. Once the mirror experiments begin, it is nearly impossible to figure out what is happening. Oculus jumps back and forth from past to present, or reality to hallucination. It becomes a huge mash-up of incoherent scenes coupled with some really bad acting.

The  horror of Oculus is just how terrible a movie it is. Nothing makes any logical sense in this film. What's also frightening is the easily predictable ending. Which could not come soon enough for me. Oculus is nothing more than a huge load of horror trash hauled out of the recycling bin.