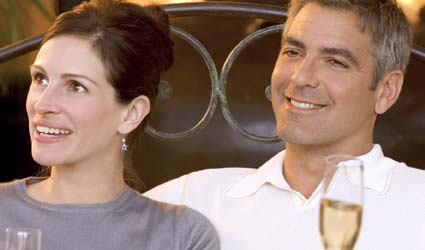 The whole gang and then some return in Steven Soderbergh’s sequel to Ocean’s Eleven, which was a remake of the 1960 Frank Sinatra caper.

In the first film, Danny Ocean’s (George Clooney) team stole $160,000 from a Las Vegas casino owned by Terry Benedict (Andy Garcia). Even though he was paid by the insurance company for his loss, Benedict demands he be paid back - or else.

In the three years that have passed since the heist, the thieves played by Brad Pitt, Matt Damon, Carl Reiner, Elliott Gould, Don Cheadle, Bernie Mac, Cassey Affleck, Scott Caan and Eddie J. Emison have spread out over the U.S. to spend their portion of the loot. Much of the first half of the film has Benedict tracking the team down at their various pursuits, and it slows down the pace of the film immensely.

In order to pay Benedict back, Ocean, who is now back with ex-wife Tess (Julia Roberts), gathers the gang and comes up with a scheme to break into a European art collector’s home. The best thing about a heist film is the elaborate planning and the final execution which is filled with gadgets and precise timing. All of that is missing here, as the cast and their personalities are what is focused on, instead of an exciting theft.

So much of the screen time is spent with the many characters, the story takes a back seat. Besides the original cast, Catherine Zeta-Jones is added as Pitt’s ex-girlfriend who is also an inspector for Europol along with a French super thief, who is vying with Ocean over who is the best thief in two continents.

The action, and there is precious little of it, takes place in different parts of the U.S, and in Rome, Antwerp and a beautiful Lake Como, Italy.

Of the huge cast, Zeta Jones comes off the best as she seems to be the only one trying to follow a script. Roberts, sans makeup, and Clooney have shown up more as guest appearances, Pitt mugs throughout and Damon’s character is portrayed as an air head.

There’s a lot of inside jokes, silly grins and winks amongst the actors. They sure do appear to be having a grand ole time making Ocean’s Twelve, too bad I didn’t have as great a time watching it.