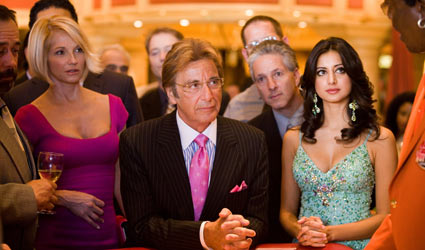 
Steven Soderbergh has rounded up the gang, the men at least, (both Julia Roberts and Catherine Zeta Jones are missing) and let them loose where it all began, Las Vegas!

Danny Ocean (George Clooney) and his right hand man Rusty (Brad Pitt) show up in Vegas when one of their own Rueben (Eliott Gould) is cheated out of his share of a new casino owned by Willie Bank (Al Pacino). He ends up in the hospital and that draws the guys to come and get a little revenge.

Bank's new garish casino is about to open and a plan is devised to steal his opening night take, which is approximately $500 million. It is suppose to work by having every game pay out all night.

Every game on the floor, craps, blackjack and slots are rigged for the player to win. Ocean has men in Mexico load dice at the Mexican factory, fix the card shufflers so players get the winning cards and weigh the coins so the slots pay off. Even a giant digging machine is brought underground to fake an earthquake which can fool the sophisticated security systems. Ocean and his crew take no chances when it comes to getting back at the sinister Bank.

Ellen Barkin re-teams with Pacino, her Sea of Love co-star, as his assistant. Wearing skin tight dresses, she's as thin as a rail and not very bright. She unwittingly takes part in Danny's scheme as she is distracted by a charming Matt Damon.

The gang is in fine form again far better than the disappointing Ocean's 12. It is the back to basics that works. The camaraderie and quick banter among the twelve plus one, particularly between Pitt and Clooney, is great fun to watch. But, it is the heist that counts, and this one is very entertaining. What works best is the good old fashioned teamwork which shows ingenuity can beat out the most intricate and expensive technology.