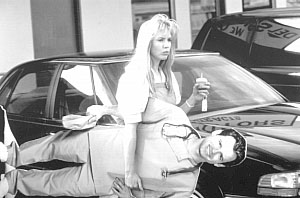 Nurse Betty succeeds in every way.  In the script by John C. Richards and James Flamberg fantasy collides with reality as Betty Sizemore (Renee Zellweger), a small town waitress and intense soap opera fan, pursues her dream world which she believes is reality.  Equally the superb cast carries the fable to believable ends.

The winner of the Best Screenplay award at the 2000 Cannes Film Festival has a dark side that collides with a comic world of illusion built around Betty's fantasy.  It affects the two hit men following her (Morgan Freeman and Chris Rock) along with the object of her fantasy love, Dr. David Ravell (Greg Kinnear).

The alternate reality is triggered by trauma caused by the brutal murder of her husband which she accidentally witnesses.  Her state of non reality creates an innocence which allows her to succeed  in a fashion similar to Ingrid Bergman's nun in The Bells of Saint Mary. Off to Los Angeles in a borrowed 1997 Buick LeSabre, which is what the killers are looking for, she seeks to complete her daydream life.

With all kinds of implausible luck, she becomes Nurse Betty, out of Kansas and into tinsel town.  When she meets the producer of Doctor Ravell's soap she appears to play the part of the Ravell's former nurse lover so well, she is offered an opportunity to be on the show.

Everyone in their authentic existence find Betty alluring, even Morgan Freeman's crusty old hit man discovers himself at the edge of the Grand Canyon dreaming of waltzing with the gently Betty.

Director Neil LaBute constantly weaves humor in and out while using the entire cast effectively.  Tia Texada's Rosa takes Betty in when she is without a living space and is shocked when her roommate leaves a party with the cast of her favorite soap.  Sheriff Balland (Pruitt Taylor Vince) and Crispin Glover's Roy, a reporter, get in on the eccentric climax which brings the waitress Betty back and leads to her destiny.

There is a bit of Joebeth Williams' American Dreamer here, with a very satisfying ending that leaves Betty in Oz, rather than returning her to Kansas.