Now You See Me 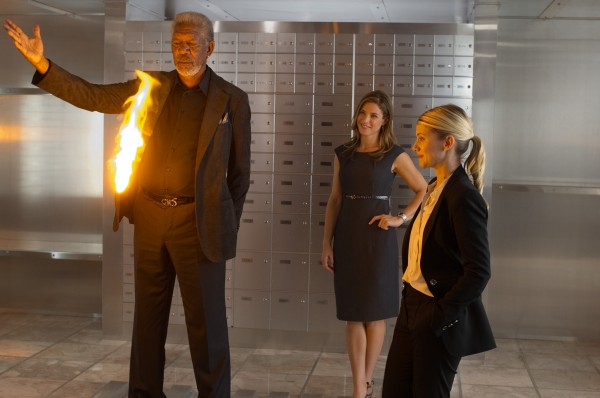 
"Come in close, because the more you think you see, the easier it'll be to fool you"

Louis Leterrier directs an all-star cast of Hollywood heavyweights in a truly enjoyable and cerebral film about Magic, Illusion, Sleight of Hand, and Spectacle.

A group of Las Vegas magicians known as 'The Four Horsemen.' Woody Harrelson, Jesse Eisenberg, Isla Fisher, and Dave Franco are perfectly cast. Collectively they steal millions of dollars from a Paris bank while simultaneously performing on a Vegas stage, thus setting the film in motion. No one can figure out how they did it.  Only that a major crime has been committed.

Complimenting each others performances throughout this hugely original screenplay. The group members each have highly specialized skills which together make them all the more powerful. Their mantra 'to always be the smartest person in the room' keeps them one step ahead of the FBI's Dylan Rhodes (Mark Rufalo) and Interpol agent Alma Dray (Melanie Laurent). They are also being pursued by rogue businessman Arthur Tressler (Michael Caine) and greedy entrepreneur Thaddeus Bradley (Morgan Freeman).

Nothing is as it appears throughout the film, forcing us to really think about what just happened, or what might happen next. We are left trying to figure it out for ourselves, which is a good thing. Too many films give away the ending in the first ten minutes. Now You See Me doesn't resolve itself until the last ten.

The key element is what's left out, enabling the viewer to fill in the blanks. For me, it was the title. A magicians complete statement is : Now You See Me … Now You Don't.   Here, it's the "Now You Don't" which drives the actors and the action. Nothing is left to chance, everything they do and don't do is intentional, and planned out impeccably.

The viewer becomes an integral part of a powerful visual and aural experience. Now You See Me is similar to some great painting hanging in a gallery. Sometimes, multiple viewings are necessary to absorb its total meaning. There's some real Abracadabra going on here, so don't miss it.