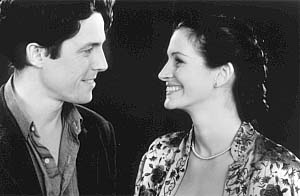 What happens to a bumbling travel bookstore owner in the quaint area of Notting Hill, England when a famous American movie star pops in to buy a book on Turkey?  Why, he falls madly in love with her, of course!

Hugh Grant plays the endearing book seller (seems to be the hip new career choice in films lately, i.e., The Love Letter and You've Got Mail) and Julia Roberts (flashing more teeth and less hair than usual) plays the star.

They date a few times over many months, because either Julia's schedule or her fly-off-the-handle personality keeps them apart.

The supporting characters are an interesting lot.  Grant rooms with a goofy slob, his sister sports orange hair that sticks up straight out of her head, and his best friend ruins everything he cooks, but it doesn't keep him from having numerous dinner parties.

A couple of notable film techniques keeps this from being a run of the mill script.  One scene has the camera overhead in a garden setting and as Grant moves away from Roberts, the camera moves higher and higher, and another which follows Grant as he walks down his neighborhood street and the seasons change in the background to denote the passage of time - it's very effective.

Grant and Roberts are so charming in their own right it makes up for the lack of actual screen time they have with one another.  In fact, without these two stars, the picture would be half as successful.

The quirky characters and star quality of the two leads make Notting Hill an appealing romantic comedy and a great date film.

It is rated PG-13 for obscenities and sexual references.