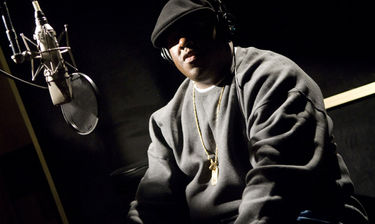 
This rise-and-fall biopic of Christopher Wallace (Biggie Smalls) generally beats the rap thanks primarily to the subtlety and approach to this music icon by director George Tillman, Jr. It has potential to cross beyond its strong urban demographic base.

Notorious stars Jamal Woolard, Angela Bassett, Derek Luke, and Anthony Mackie, and has plenty of visual bling to it, as well as a pulsating soundtrack. This hip-hopping blast from the relatively recent past isn't loathing or cynical about the slain rapper (known as Notorious B.I.G.), whose murder went unsolved. It celebrates the passion to create a "slamming" style of music which was high on the cultural scene in the mid-late 1990s.

Wallace's own son Christopher, Jr. plays him in the early scenes put down because of his appearance, though doing very well in a Brooklyn Catholic school. His mother Voletta (Bassett, in an underwritten part), however, is unable to deter the pressured teen from getting involved with drugs and gun possession, leading to a prison sentence. But, there he hones his talent for writing and rhyming.

This somewhat overproduced, verbally tangy, if excessive and familiar foray has a propulsiveness to it thanks in part to Woolard as the older Wallace who becomes distinguished in freestyle hip-hop competitions. Young producer and rising music mogul Sean "Puffy" Combs (Luke) becomes close with the portly, dark-skinned man who finds himself on the fast track to stardom in a dangerous time. He also hooks up with other talented rap artists like Kimberly Jones (Naturi Naughton) who later would be known as Lil' Kim.

Mackie is a scene-stealer as the edgy, yet appealing Tupac Shakur who would be Smalls' best friend and confidante, at least for a while. Bad blood would eventually affect their relationship and the rap community as a whole, as a the shooting of Shakur in a New York record studio would have him turned against Smalls and Combs.

Tillman, Jr. is able to coherently navigate the tumultuous, vibrant rap scene, with the gangsta element and East-West tussle before Shakur and Smalls were both gunned down within a six month period. The inner strife and outward pain with a marriage to singer Faith Evans, nicely endowed by Antonique Smith, as well as his mother's battle with breast cancer, is covered decently, if not entirely even-handed. The loss of B.I.G. is still a bittersweet pill for many to swallow, as the conspiracy angle is left for someone else to mine for entertainment. And, there is enough on celluloid for the definitive Biggie and Tupac relationship. Here, it's pretty sharp reunion with archival footage at the end in a bustling, pensive Brooklyn.