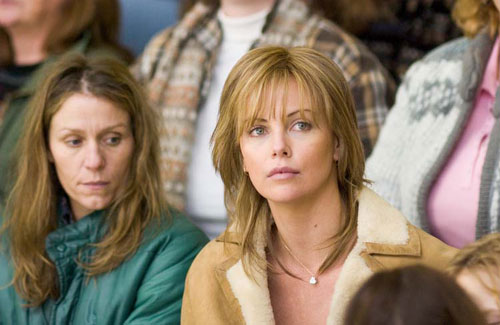 
After seeing Whale Rider Charlize Theron was interested in working with director Niki Caro, a unique filmmaker from New Zealand. Theron not only was aware of Caro's style she has shown an intelligent direction for her career by not allowing herself to be used just for her youth and beauty. Monster which brought her an academy award along with North Country are the best examples of parts which display her ability rather than her looks. She has chosen a wise path for success.

In North Country Theron is Josey Aimes who grew up near the coal mines in Minnesota played wild and free in her youth and as the film begins has responsibility for two children - one is her son Sammy who is beginning to range in the wrong direction and challenge Josey at every turn. She is not a perfect hero. Money is an issue which forces her to seek work in the mines, where she earns six times her salary as a hairdresser.

The work is difficult and dirty and the men in the mine who feel threatened by women on the job believe they have the right to harass, insult and physically punish the newcomers who may take away the one power remaining in their lives, making the money for their families.

Even her father, Hank (Richard Jenkins) has negative emotions when it comes to his daughter working side by side with the men. Her action brings a certain shame upon him which is initially understood by his wife Alice (Sissy Spacek). But with time the toughness and courage of Josey turns Alice and when Hank finds that Alice doesn't live there anymore he must search for the right answer which is forced to the surface at a union meeting.

Frances McDormand's Glory is the female union representative who wants porta-potties on the job site because it is more complicated for women to relieve themselves than men. As her life changes she reaches emotional plateaus which increase the raw low key but constant tension that permeates the film.

While Anita Hill speaks against a future Supreme Court Justice on television Josey and the other women on the job must deal with rape, semen on clothing, feces and groping which occur each day. They live in a society at work that is like a middle east society dominated by men where the miners, the brothers union and the company management look the other way. Not only can the men do as they please, there is a sense that it's their right to do it.

Without her father and son on her side Josey is a lone knight on a dirty trail expecting might for right and even tilting at windmills while the world looks the other way. Her determination with the help of Woody Harrelson who plays her lawyer causes her to come out a shinning knight for every working woman.

With fine direction from Niki Caro and award quality performances by Theron, McDormand and Richard Jenkins this is a top ten film.