No Country for Old Men 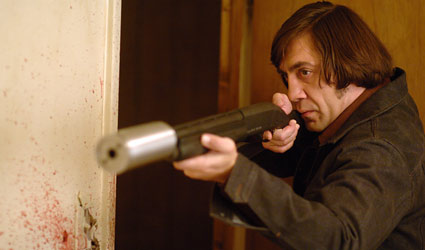 
Joel and Ethan Coen have crafted one of their finest on the big screen with No Country For Old Men. It has a thrilling, penetrating quality that nearly surpasses their formidable early pictures, like Blood Simple.

From the esteemed 2005 Cormac McCarthy novel set in 1980 Texas, the siblings collaborate to bring vitality and immediacy to a tale involving a sheriff, a sociopath, and the welder who hocked his money. Though not pervasive, the violence leaves the on-looker stung, if not sometimes stunned.

The jaded Ed Tom Bell, acted with a certain ruggedness by Tommy Lee Jones (In The Valley of Elah) learns that the lawman can't put his gun away quite yet.

Josh Brolin (who lent noticeable support in American Gangster as a stern crooked cop) is local fellow Llewelyn Moss who, in a desert area, comes upon a case with much money in it.

The welder figures his wife (Kelly Macdonald, sporting a nice Southern lilt in place of her Irish brogue) needs to be relocated with her mother. And, he'll move out of town, too. But, there is something about the relentlessly indefatigable Anton Chigurh (Javier Bardem). The hardly forecasted ride hinges on logic carried to a brutal level, as Sheriff Bell finds his way on a sanguine path with Llewelyn's life hanging in the balance.

The filmmakers trust in their subtle, dark, sometimes ironic twisting of McCarthy, even if it is a rather slavish adaptation. It's clear the characters are never diminished on any level, and each follows their tenets to a tee. Bardem, in particular, convinces as a madman with his "friend-o" and coin-flipping, becoming one of the best screen villains in recent memory. And, the moustached Brolin etches out a gritty, conflicted of a man with a simple plan, certainly elevating his status beyond the secondary or B-movie type (Planet Terror).

The production team are in sync with how everything fits together that pulsates with feeling for the whodunit as well as the Western. If the ultimate conclusion isn't startlingly realized, it would be hard to find something more relentlessly gratifying. No Country For Old Men is cinema done with boldness, sincerity, guts, and glory.