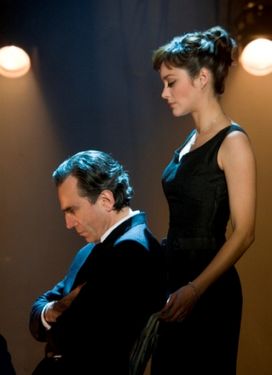 
Rob Marshall's Nine isn't the robustly energetic and rousing adaptation of an award-winning Broadway musical as Chicago demonstrated, but it's still has a sophisticated, stylized nostalgia for Italy.

The filmmakers slickly and straightforwardly have reflectively interpreted a musical with quite a pedigree with music and lyrics from Maury Yeston with some new additions and others dropped, oddly enough, including the title tune. The 1982 show starred the late Raul Julia in the role occupied here by Day-Lewis, and many like what Antonio Banderas brought to the 2003 revival.

Part of the allure here is a cast who are mostly unseasoned in the singing department prove surprising well and an evocative depiction of a country with extravagant use of its sets like Rome's Cinecitta Film Studios.

Based on Federico Fellini's rather surreal, classic 8 1/2, the spirited production inhabits an era (mid 1960s) when Loren flourished. Now she is the mother to Day-Lewis's introverted, dashing maestro Guido Contini who delivers a kind of lullaby to reassure her conflicted cinematic genius. One who is beginning a movie that hasn't even been written yet.

Many of those comely figures in the commanding Guido's life proceed to this elaborate work-in-progress with much pressure from the fact that his previous two tanked.

Luisa (Cotillard), Contini's dutiful missus, is told to remain at home as her womanizing husband finds solace in a swank coastal habitat. The tale from Michael Tolkin (The Player) and the late Anthony Minghella (part of the collaborative New York I Love You) accounts for Guido's narcissism and struggles mainly with women, except for Luisa, fabricating their parts through a song.

Dench lends a beguiling presence as Lilli, Guido's old costumer and confidante, Fergie shines as a prostitute from the filmmaker's boyhood with a showstopping "Be Italian", Kidman less so as Guido's muse and often lead actress in "Unusual Way."

"Take It All" and "My Husband Makes Movies" are rendered in mindful, touching ways by Cotillard, while a lusty, somewhat crude Cruz brings some heat to the proceedings as the mistress in "A Call From the Vatican." Huston's coquettish reporter Stephanie croons the catchy, new "Cinema Italiano" which may be the most memorable for viewers less familiar with the musical that again is heard during the closing credits.

If the overrall result is lacking in dramatic and emotional unity, this modernized version of theatre brought to life from film is a tribute of sorts and affectionate towards a golden age of Italian cinema. Marshall works well with his crew in the transmutation of color and b/w in the numbers as the editing isn't as swift and engaging as Chicago but manages to be amusingly chaotic. And, production designer John Myhre, costume designer Colleen Atwood, and lenser Dion Beebe are among those who enable Marshall's chic, fabled conception.

Day-Lewis may not have the magnetism that Renee Zellweger projected through Roxie's eyes in Marshall's word-of-mouth Oscar winner, but sets out a savvy performance, complemented best by Cotillard and Dench. Nine swirls with grandiose Italian passion though not the resourceful, transformative experience that a musical like this could have been.