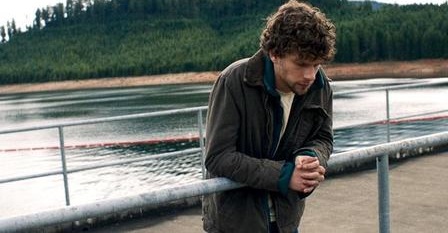 
A provocative, if ultimately soporific thriller comes from Kelly Reichardt who has worked well with Michelle Williams in Wendy and Lucy with some ecological topicality touched by loyalty and ethical dilemmas.

Night Moves (no relation to a formidable Gene Hackman 1975 film) is set in rustic Oregon and has a capable central trio of actors in Jesse Eisenberg, Dakota Fanning, and Peter Sarsgaard.

Co-op farmer Josh (Eisenberg) wants to raise awareness on current electricity consumption (like continuous use of iPods) with rich girl drop out retreat manager Dena (Fanning) in a radical, explosive way at a local dam. They get former Marine Harmon, an insouciantly relaxed but dangerous Sarsgaard, to partner up with them as the title refers to an aspect of their haunting activism. It requires procuring a certain type of fertilizer as Dena has to deal with a store manager (James Le Gros).

Fanning brings an understated gleeful, if annoying spark to Dena who isn't really fully fleshed out, and Eisenberg endows Josh with a certain amount of pungency but is hardly empathetic, at least based on ambiguity felt as anxiety and paranoia become more prevalent. Like Fanning, Sarsgaard's shadings of Harmon doesn't appear to be well-developed though the character's appetite to make a difference in a consciousness.

Still, this fallout of a simple plan while contemplative and trenchant on its own surface terms doesn't always work on the roadblocks and subtly taut sequences in an increasingly disturbing way. The filmmaking expresses a visual clarity to help impress its naturalism and motifs without any thrilling action. What results from detailing the concerns of this determined trio is internalized well enough to make its point.

Yet, the typically measured pacing by Reichardt skewered well enough with minimalist, spare strokes drains the impact of the drama which has a more pronounced Henry David Thoreau outlook when it comes to scaling down and focus in life. But, Night Moves in spite of the efforts of cast and crew (it doesn't help that one character is really not given the chance to make more of an impact) isn't as inviting a fictionalized, if isolated examination of environmental terrorism as much as it introspectively and hypnotically stirs up.