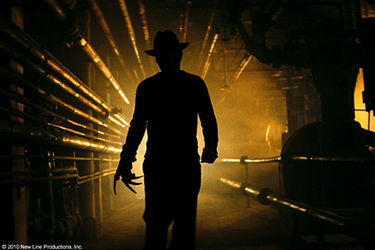 
Freddy Krueger has been invading kid's dreams ever since Wes Craven introduced him 26 years ago. This version directed by Samuel Bayer offers nothing new in the scare department.

Teenagers who fall asleep and dream of Freddy Krueger don't usually make it out alive. No amount of prescription drugs or energy drinks can keep them awake and from a terrible fate. They dream of the man with a charred face, striped sweater, fedora and knives where fingers should be, and they don't know where he came from or how to get rid of him.

Jackie Earle Haley now plays Freddy, the part that Robert Englund made famous. Although with the heavy makeup he wears, it could be almost any actor in the role.

One by one, Springwood, Ohio teens are killed, and no matter where they are, Freddy seems to find them. He attacks them in the classroom, at a diner with friends and of course in their own bedrooms where he climbs out of the walls and throws them around like rag dolls.

Finally, when it seems like they will be the next to die, two teens played by Kyle Gallner and Rooney Mara do a little research to try and outsmart the killer.

We've seen most of these gimmicks used before, and loud noises, dogs barking off in the distance and Freddy scraping his fingers across a wall in a dark, watery cellar just don't seem to scare like they used to. Perhaps it's time for the old boy to hang up his glove.