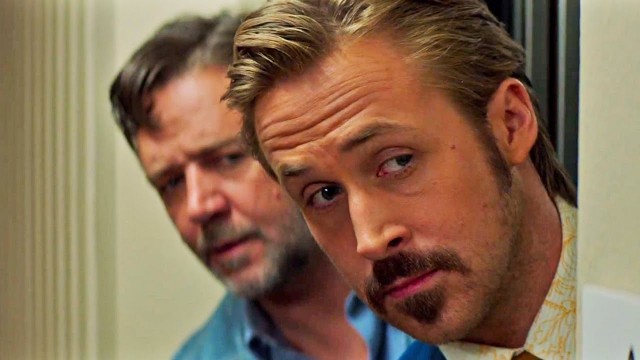 
This is probably the best comedy we are going to see in the Summer of 2016.

It all begins as a young boy takes a sneak peak at a center fold of Misty Mountains (Murielle Telio).  A few seconds later a speeding sports car crashes through his house traversing through its length and crashing over the hillside behind the building.  On the ground after the crash the body of Misty Mountains is discovered.

It's the mystery of her death that two not very competent private detectives, Russell Crowe and Ryan Gosling who makes money from elderly clients like an old lady who wants him to find her husband who disappeared right after the funeral. Gosling is remembered for the comedy he brought  to the screen in the off-beat film Lars and the Real Girl. Russell Crowe plays a strong arm guy who beats up people that are bothering his clients, he's like the hero of the old TV show Equalizer.  Early on he beats up a 30 something guy who is hitting on a 13 year old girl. Crowe who comes from the serious world of: Cinderella Man and Beautiful Mind fits in well in this unusual  comedy formula.

But Gosling's 13 year old daughter played masterfully with savvy by Angourie Rice steals every scene she is in.  She is innocent but understands her fathers business and his obvious shortcomings.  He drinks and she drives the car when they go out on the streets of Los Angeles.

A good script always works and this one is well put together. We are lead into a mystery chase to discover where Misty Mountains has gone along with another young performer who has a part in the flick and has an alternate purpose in making the film.

Filled with action and silly results from the activities of the two stars it never stops entertaining, Gosling sees a visage of Richard Nixon when he believes he is about to die, is just one of the smart twists we get to see.  It confirms to me that serious actors can be better at comedy than comedians.  Cary Grant was probably far better in Arsenic and Old Lace than Bob Hope who was first considered for the part.  Russell Crowe is perfect as Jackson Healy the enforcer and Ryan Gosling has been successful in films like the comical Lars and the Single Girl.

Nothing is better on the Summer screen than a well played comedy and this one is very well played.