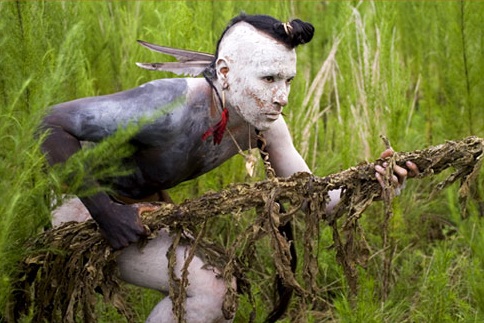 
There's an undeniable haunting beauty to Terrence Malick's latest sumptuously lyrical picture, The New World. It only took Malick seven years to have his select fan base wait instead of two decades before his last one, The Thin Red Line.

His new sweeping exploration uses the 1607 Jamestown Settlement as the backdrop of a reflection of America at the time and what was to come. It may not be the kind of film that students will flock to see, mournful and elating as it seems in so many ways. But, there are shifts in this original picture that isn't anything like what Disney did in highlighting the "colors of the wind."

Colin Farrell rises above the torpor of Alexander in the role of John Smith, a strong-willed soldier of fortune, who comes out of shackles thanks to Captain Newport (Christopher Plummer of Syriana). But, in a very unhurried tale of the old affected by the new, it's the Pocahontas character that is the most screen-friendly and mercurial.

Newcomer Q'orianka Kilcher (who made this when she was 14) gives a mythic love story a grace that is wondrously attuned to Malick's sensitive, thoughtful vision.

While Farrell doesn't always register as his presence and Smith's fortunes change, he has some affecting moments with Kilcher. Christian Bale (Batman Begins) brings a welcome, eloquent vigor to tobacco farmer John Rolfe, who'll marry Pocahontas and whisk her to England.

Malick's camera may meander to some to capture the wonder of it all, like an early harbor scene or an attack on settlers. A remarkable contrast with the detail of early 17th century England shows the effort of another passionate production led by the painterly precision of lenser Emmanuel Lubezki - no electric lights were used.

Hypnotic for some, jejune for others, The New World projects its bathos and gravity with voice-overs and plenty of gray skies overhead. Its unique mythic aura is endowed best by Kilcher who registers the feelings of a new mother in a bright, intelligent way.