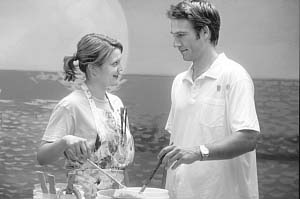 Drew Barrymore appears to be opening a new track, for the third time in a row she is a character that is not drop dead beautiful who is successful in love by the end of the story.  She has worked her way through Home Fries and Ever After; in Never Been Kissed she is Josie Geller named for the cartoon character Josie from Josie and the Pussy Cats.  The kiss at the end is delightful, "The Kiss" might have been a better tittle, but the trip to the pitchers mound at the state baseball championship  is filled with so many thorns there is little satisfaction.

Unlike Rachael Leigh Cook in She's All That, Josie returns to high school as an undercover reporter and endures her painful high school days (in her imagination) while traveling the same bumpy  road again.  Cook as Laney Boggs isn't popular but she doesn't care, she is quite comfortable with her life.  Josie is one of those kids who longed to be a part of the inner circle of the upper cliques in school.  Her feelings of inadequacy feed the illusion that not being the best dressed or the class president leaves one unworthy.  That path is portrayed so well it is embarrassing rather than comical or even reasonable.

Sam Coulson (Michael Vartain)  a sympathetic teacher  falls in love with Josie as a bright intelligent student.   He gets to provide the kiss when he knows she is a twenty five year old reporter.  Rob Geller (David Arquette - Ravenous) is  a brother who has little ambition other than to play baseball in high school and that ship has passed him by.  It is difficult to believe Leelee Sobieski as a drab nerd, her beauty shines through the dullest costume.  Molly Shannon is delightful as Anita, the girl who has been kissed many times by every male on the Chicago Sun-Times.

Too many  of the horrors of high school spoil the kiss.