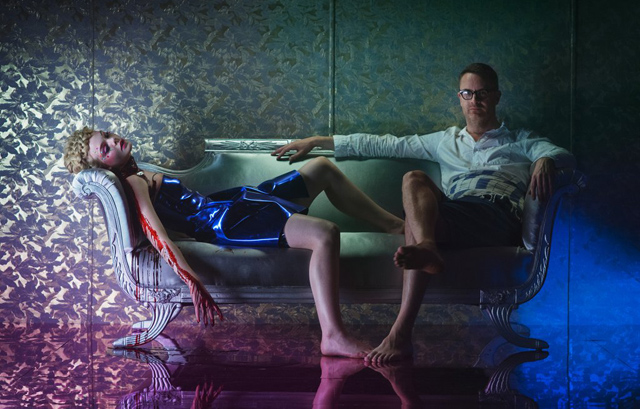 
Nicolas Winding Refn's latest opus filmed in Pasadena that he co-wrote and produced has some of his trademark striking visual techniques set in the L.A. modeling scene, not the Big Apple or City of Lights meccas.

The Neon Demon is horror melodrama that will educe much reaction but most likely alienate even more discerning art-house cineastes in portraying a fair amount of lurid brainwashing into the digital age's perception of the obsession of beauty. It's like two movies in one or a less appealing or involving analogue to "Cat People" or more recently the Natalie Portman/Darren Aronofsky collaboration Black Swan.

The filmmaking does invite a certain level of self-indulgence obviously in the level of craftsmanship to realize a post-modern guile which goes beyond The Valley of the Dolls to embrace vampirism and necrophilia.

The main character is Elle Fanning's mysterious, naïve orphaned teenaged Jesse who makes her way into a life that she could never foresee, aided by callous designer (Alessandro Nivola) and agency agent (Christina Hendricks). Her ascent does not sit well with older envious models the more recognizable being played by Bella Heathcote. Probably from the Danish director's standpoint as a closeness with a new BFF develops would be Jena Malone's 'make-up' artist who helps to set the more extreme mood to come. Desmond Harrington and Keanu Reeves as Jesse's new hotel manager also offer support in what can mirror the subject as mirrors themselves about to accentuate the leitmotifs.

Ultimately, as grisly and grotesque as The Neon Demon becomes, alternating between quiet and more startling or explosive buoyed by Cliff Martinez's sparse electronic score, the substance just doesn't propel it that much like Refn's more balanced and penetrating Drive. Dakota's younger sister (who's starred in Super 8 and Malificent and worked with Sofia Coppola) does have presence but little character arc to go with the charisma she evinces even when looking like a 'Carrie' in an early moment presumably from a boyfriend's camera. Audiences will be taken to many places with quite an increasingly satanic glow that may provoke more sadness than admiration for what could have been a more crafty New Age cinematic composition on celebrity.