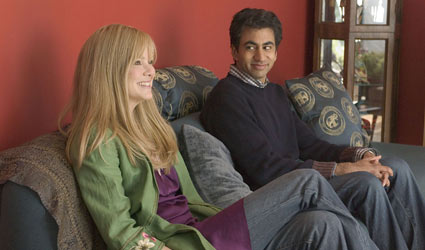 
Mira Nair interestingly and intimately creates a cultural mosaic over three decades in The Namesake.

While the talented director has much to present in a film needing good word-of-mouth, sometimes the well-mounted picture pushes things unknowingly too much.

The prologue takes place in 1974 Calcutta, India, and moving up to the impending marriage in 1977 of Ashima (Tabu) and Ashoke (Irfan Khan). Ashima is a lovely, energetic promising vocalist. They settle down around the world in the Big Apple as he is employed there.

Much of the film is situated on the couple's conflicted (now grown) son, Gogol (Kal Penn of Harold & Kumar Go To White Castle), who is named after Ashoke's favorite writer.

Gogol, who doesn't like his name in his efforts with the opposite sex, has worked hard to become a successful architect. The screenplay by Sooni Taraporevala has him trying to come to terms with his native land. It's been handled well before in films like Bend It Like Beckham. So his family figure prominently, including his sister (Sahira Nair), a family friend from Bengal (Zuleikha Robinson), and the very attractive American woman he's planning to marry (Jacinda Barrett of School for Scoudrels).

Though The Namesake runs a couple of hours, the characters may not be as fully realized as one had hoped. But, the cultural observations on hand are insightful and the anecdote narrative has an engaging dramatic arc to it. In a rich production, there is more on hand than a multi-generational examination that looks at the the diversity of those from India and America.

From the parents, Khan and Tabu are very likeable as they try to better themselves and their family in a strange, often challenging environment, with the latter more compelling based on how she deals with change in her life.

Penn, who has sunk in the "Van Wilder" movies, however, is very good in a layered performance, ultimately trying to find out who he is. The vulnerability really comes through in scenes with Tabu and the sexy Barrett.

Though not of her highest, most gratifying works, Nair (Monsoon Wedding) has made a touching, if somewhat maudlin film that allows one to reflect inside and out, wanting to experience the diversity that our world offers.