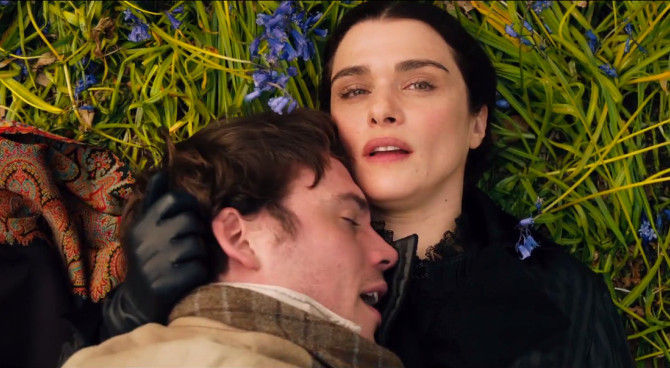 
A new adaptation of Daphne DuMaurier is handsomely mounted, but fools around with audience expectations up to its prickly conclusion.

My Cousin Rachel stars Sam Claflin, Rachel Weisz, Holliday Grainger, and Ian Glen and has quite a cliff-side setting in Cornwall at the turn of the 19th Century.

The point-of-view of Claflin's naïve and later obsessive Philip is the core of a tale which might be akin to a famous Barbra Stanwyck/Fred MacMurray collaborations. Philip's relationship with older cousin guardian Ambrose off to Italy for medical reasons is important as he runs his farm estate and the latter marries Weisz's deceptively alluring eponymous widow who'll become one again.

For a while, there is some zesty insinuating activity provided by director Roger Michell (Notting Hill) as an infuriating, arguably misogynistic Philip becomes smitten with the woman called by Ambrose "the torment." He'll be warned about her by suspicious types in his orbit like godfather (Glen) and left behind confidante (Grainger, who gets a couple of solid scenes) when it comes to handing over the manor over to her.

As Michell stages and concocts the narrative to wrong-foot the on-looker, Claflin (Their Finest) isn't as sympathetic as one may hope and Weisz (Denial) perhaps too much as money and jewelry exchange hands. Philip obviously shows a range of emotions and Claflin expresses them well, albeit not like a younger Richard Burton from the earlier 1952 rendition. But, he is still dominated by the classy, canny Weisz who mercurially keeps one guessing as to her true motives; an interesting counterpoint to Olivia de Haviland's portrait.

This Rachel may not be the darkly ambiguous involving unfolding about a cousin who can have varying effects on many folks, but there is enough distaff and visual presence (as well as a haunting, iterative piano-infused score) to hold interest even when the plotting becomes too static even for discerning art-house patrons.