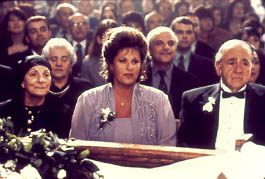 Rita Wilson and Tom Hanks were so impressed by Nia Vardalos' praised one-woman show based on her life that they backed her idea all the way to the big screen with the comedic and touching My Big Fat Greek Wedding.

You don't have to be Greek or part of a big family to see the charms of Vardolos' film which dallies in ethnocentric problems and the ugly duckling syndrome in a light-hearted manner.

Vardolos could only cast herself in the lead of Toula Portokalos, an awkward 30-year-old whose life is stuck in a rut in her father's Greek restaurant.

Her parents, especially her dowdy father (Michael Constantine), aren't shy in telling her that she needs a life partner to fulfill the necessities of her family's heritage.  That means marrying Greek and having babies in order to prepare all those Greek meals for them.

The cast includes Lainie Kazan as her frank, yet concerned mother and the talented Andrea Martin as her aunt who gets her a job at her travel agency after some computer course work at a community college.  The once ignored waitress feels better about herself with some makeup, contact lenses, and chic business outfits.

Of course, Vardolos feeds into the culture clash with the attraction of Toula to a tall, handsome schoolteacher, Ian (John Corbett of HBO's "Sex and the City") who isn't Greek.  Their first scene with some glancing and some trepidation is humorous even if it has a sitcom feel to it.  Soon, they fall for one another as Toula idolizes this "xenos" who also is a vegetarian.

My Big Fat Greek Wedding realistically handles the impact of Toula's family on her important decisions which will always influence who she is and who she will be.  The story may seem as old as a chunk of feta cheese or a bottle of oozo, but Vardolos has the right comfort level from the capable direction of TV author Joel Zwick who lets the actors shine in a lively mood similar to Norman Jewison's indelible Moonstruck.

Though Vardalos' endearing Toula doesn't nearly rival Cher's luminous raven-coiffed Italian, her writing is rooted strongly in its feeling for human connections with droll results.  Corbett makes his WASPish pariah blithely engaging and pairs well with an impressionable, earnest Greek counterpart.  And the smoothly paced comedy gets good mileage from the Zorba-like father as Widex is just one witty thing that provides My Big Fat Greek Wedding with broad personality and feeling.