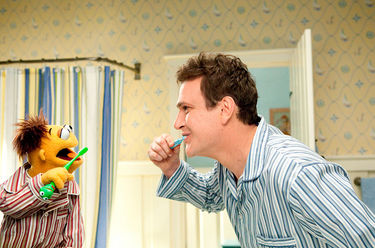 
Jason Segel and Nicholas Stoller (who both combined on the adult comedy Forgetting Sarah Marshall) are the scribes for The Muppets which could very well invigorate a  big (and small screen) series of a half-dozen movies which didn't end so positively in 1999 with "Muppets From Space." Viewers will have their funny bones tickled by Small Fry, a Toy Story-inspired short preceding this where toys from a fast-food emporium vent out their discarded frustrations.

Now the latest incarnation, starring (huge Muppet fan) Segel, Amy Adams, Chris Cooper, as well many cute favorites from the variety show past (Kermit The Frog, Miss Piggy, Animal, Gonzo, and Fozzie Bear to name a few), has enough energy from a jaded premise to be very family-friendly for adults who long for some Muppet domination, as well as youngsters eager to absorb this aura. Also, one that is more poised to merchandise familiar product line this holiday season.

The storyline is very familiar to an unsuccessful film from a theme park attraction by the same studio, but here smarmy oil baron Mr. Richman (Cooper) is set on razing L.A.'s Muppet Theatre. It's up to Walter (a huge Muppet supporter and Muppet voiced by Peter Linz), his brother Gary (Segel), and the latter's uncomplaining girlfriend Mary (Adams), to join Kermit to set up a telethon and raise the large sum to prevent this.

There is a witty and colorful barrage that would tickle the likes of Paul Reubens as director James Bobin offers an initially vibrant reunion of an adored clan. Of course, the Muppets have widely dispersed in there lives and it's not easy urging them to convocate for this important event which invites renovation and rehearsal. With retro gags important to the writers, there's a new addition called '80s Robot.

Jack Black ends up doing his usual shtick as the celebrity host as the relational, lingering angst when it comes to Miss Piggy and Kermit, as well as feelings between Mary and Gary don't have enough snap, as the overall humor begins to well up with Kermit and Gary having their motivational moments.

A strange, but most distinguished "Man or Muppet" is arguably the best musical number in a franchise known for its cameo appearances. An old favorite in Rainbow Connection sounds as good as ever and there are notable covers of more recent of rock and hip-hop music.

Many will enjoy what the climax offers as the memory of Jim Henson's shrewd shop work is ably recreated in a serviceable, but finally slackened way. If  The Muppets has enough magic for an enthusiastic fan base, a big bang for its makers (along the lines of other live-action and animated creations) could come with more adept adventures in moving forward from a spirited nostalgia.