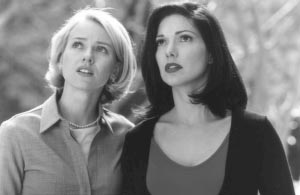 Films directed by David Lynch are often randomly pieced together, like bits of information stored in various location in a computer; no clear time line develops and we are left to our own imagination to determine what occurred first or last.  Mulholland Drive begins and ends in a car on Mulholland Drive but does it begin or end in that location?

Mulholland Drive is an exclusive neighborhood above Los Angeles which Rita (Laura Elena Harring) is about to visit, but her driver suddenly pulls a gun and she is in danger; faith steps in and two cars drag racing cause a violent crash and Rita finds herself walking down hills back to the city.  With her memory lost she crashes in an apartment which Betty (Naomi Watts) is borrowing from her aunt.  The two women become friends as Rita wakes up and realizes she has no memory.

Betty is new in town and has a fresh innocent look and atmosphere about her.  She is perky and beautiful and able to audition and presents herself very effectively.  But this Hollywood is filled with dirty little secrets, power plays and lovers.  Betty learns that this world turns differently than expected, something like a David Lynch film.

Justin Theroux is the director, Adam, who initially refuses to be forced into accepting an actress he doesn't want in his film even though a secret power broker, Mr. Roque (Michael J. Anderson) makes it clear his choice will get the part.  But even Adam can be influenced by the sexy Rita at the expense of Betty.

While Coco (the great dancing Ann Miller) manages the apartment where Rita and Betty are staying she also is in a position to influence Adam who turns out to be her son.

Lynch mixes cameo appearances by many stars who get no billing, with decaying dead bodies, strange 3 AM performances, stunning sex scenes between Rita and Betty, betrayal of love, hired killers, clumsy murders which result in bullets through walls, a back up singer who replaces Betty - all of which occurs in random fashion and leaves us in the end with the task of determining what happened, why it happened and when it happened.

Lynch's directing hand is always challenging to the audience.  With the exception of The Straight Story since 1986 we are required to calculate and question what we are seeing on the screen that is filled with Lynch images.   He brings us to places where others hesitate to go, because of that his films are not mainstream and at times we wonder what is going on in his head.  Whatever, it  produces unique interesting films like Mulholland Drive that attach themselves in our mind and won't let go.