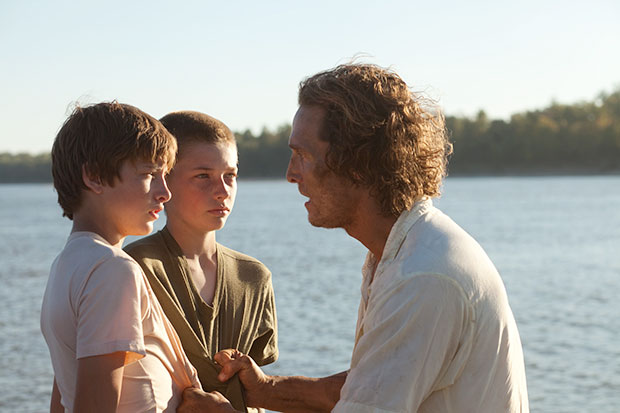 
Influenced by the likes of Mark Twain and maybe even Robert Louis Stevenson, director Jeff Nichols (Take Shelter) has fashioned an enjoyable slice of Americana, like its disheveled eponymous character. For some it may have some of the feel of a Stand By Me along with the meditative, poignant Beasts of the Southern Wild.

Mud stars the ubiquitous Matthew McConaughey, Tye Sheridan, and Jacob Lofland, as well as Michael Shannon who made quite an impression in the aforementioned 'apocalyptic' Nichols picture.

While McConaughey (Bernie, Magic Mike) exudes like ability as the glib, cunning Mud whose lodgings (a boat hull in a tree on a small abandoned peninsular region) are the result of a flood in the Southern Arkansas delta of the Mississippi. Initially the guy with 'Seven League boots' and donning an asp tattoo derails the plans of a couple of 14-year-olds Ellis (Sheridan) and best friend Neckbone (Lofland), as Ellis is unhappy at (a tenuous houseboat) home with the unsettling relationship of his parents (Ray McKinnon, Sarah Paulson, two decent character actors getting more exposure of late on the small screen in two F/X original series).

Nichols's fairly atmospheric, engaging tale hinges on the 'Wanted' squatter assimilating Ellis and Neckbone into his plans for a getaway on the waterway with attractive girlfriend Juniper, done with less wholesomeness than usual for Reese Witherspoon, relegated too much on the back-burner. He couldn't take Juniper's hurtful old boyfriend anymore.

The superstitious and pretending of Mud reaches Ellis's vulnerability, particularly when it concerns his feelings for an older high-schooler, May Pearl (Bonnie Sturdivant) who he feels is out of his league. An orphaned Neckbone has been brought up by oyster-diving uncle, a more droll turn for Shannon, as he and his unsophisticated will have their share of ups and downs.

McConaughey is good enough again in this smaller-scaled element (i.e. budget) that acting opposite someone like Sheridan (The Tree of Life) as the boy that would grow into the Sean Penn character) can manifest a surprising talent and maturity for his age. Sam Shepard provides a brief paternal-like presence as Nichols overall coaxes a pretty convincing coming-of-ager perhaps a little variable like one character in a sweet, naturalistic rendering with a little mystery and bounty hunters.